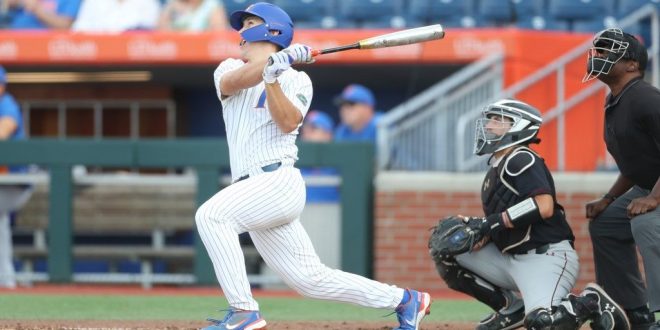 Wyatt Langford leads Florida's explosive offense in the series opener against South Carolina on May, 19 2022. (Photo by Jordan McKendrick, courtesy of floridagators.com)

The Florida Gators’ Baseball team takes on Central Michigan, to start their march to Omaha in the 2022 NCAA Gainesville Regional,

The Gators are looking to improve to 8-0 all-time against the Chippewas.

O’Sullivan Not Undercutting His Opponent

In the first game of the Gainesville Regional, Florida Head Coach Kevin O’Sullivan is not underestimating his next opponent.

In a recent press conference, O’Sullivan said he is aware of the opponent he is facing.

The Gators and their catchers will need to be sharp against these speedy Central Michigan players on the base path.

Bischel and Players Ready for Match

Although Central Michigan Head Coach Jordan Bischel is expecting a tough matchup, he believes his team is ready to face Florida.

The Chippewas finished the regular season 42-17.

They also outscored Ball State in their last two games 23-10.

Moving from catcher and first base to the outfield and leading off, Gator Wyatt Langford says keeping things the same at the plate has worked well for him.

From the leadoff position, Langford had six hits and five runs in the Gators’ SEC tournament run.

Langford continues on about pace, saying taking things one game at a time helped Florida in recent games.

He will look to lead things off for the Gators in their next game early against a fierce Central Michigan pitching core.

The final thing the Gators baseball should look out for is the Central Michigan pitching.

His next opponent, the Gator offense, is batting .273 overall.

Finally, pitching for the Gators, sophomore Brandon Sproat heads into the Friday night game with an 8-4 record and a 3.59 ERA.

Matthew Bell is a senior at the University of Florida. He completed his associates degree at State College of Florida in Bradenton and transferred to UF in 2019. His favorite sports are American football and baseball. Matthew also contributes to The Point Podcast and provides local hourly news for All Things Considered.
@@pod_mattb
Previous Al Horford has big finals performance
Next Florida set to take on Oklahoma State for semifinal spot 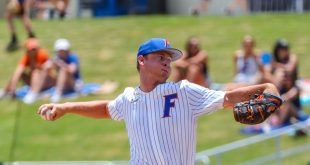