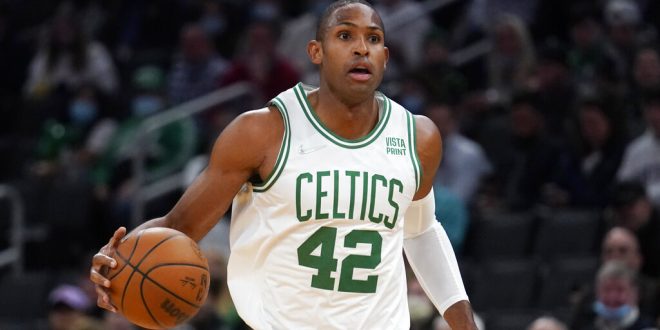 Boston Celtics center Al Horford (42) dribbles the ball down court during the first half of an NBA basketball game against the Washington Wizards, Wednesday, Oct. 27, 2021, in Boston. (AP Photo/Charles Krupa)

Gators legend Al Horford made quite the impact in his first-ever NBA Finals appearance. Nobody in NBA history has logged more postseason time before reaching the NBA finals than Al Horford. So, when the opportunity presented itself, Horford stepped up.

Adjusting on the fly

The Celtics found themselves down for most of the game Thursday night. Boston star Jayson Tatum struggled the whole game, shooting 3-for-17 from the field. In a situation where their star player wasn’t playing well, Horford knew he had to elevate his game.

Entering the fourth quarter down 12 points on the road, things looked very bleak for the Celtics. That’s precisely when Boston flipped the switch.

Horford was asked about the defensive adjustments that the team made in the fourth quarter, and he mentioned that the team focused on switching and this had a lot to do with their fourth-quarter comeback.

Steph Curry hit the ground running Thursday night, scoring 21 points on six three-pointers in the first quarter, but after his first quarter the sharpshooter cooled off. Curry finished the game with 34 points, but only four of those points came in the fourth quarter.

When asked about how the Celtics were able to contain Curry, Horford spoke about the versatility of Boston’s defense.

The Celtics were able to consistently switch different defenders on Curry in the fourth quarter. This made it hard for Curry to generate offense and opened the door for a Boston comeback.

With 5:34 remaining in the fourth quarter, the game was deadlocked at 103-103. This is when Al Horford put the finishing touches on his incredible performance.

Horford went on to score the Celtics’ next eight points to give Boston a 111-103 lead with 3:47 remaining. This run sucked the energy out of the home crowd, and the Warriors were never able to come back from this.

Then with 40 seconds remaining, Horford put the final nail in the coffin by scoring an and-one layup to put the Celtics up 15. Horford then proceeded to celebrate by flexing his muscles in front of the Golden State crowd.

HE WANTS A RING. pic.twitter.com/WshsndQUzw