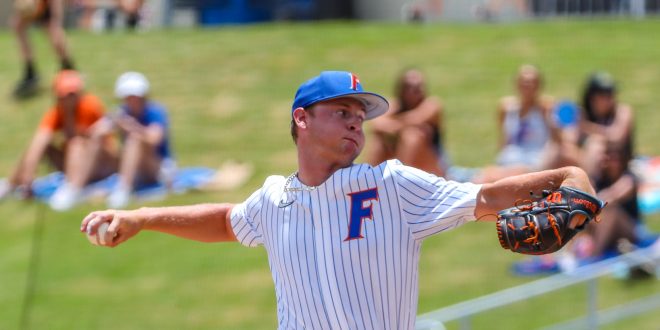 The 2022 Gator Baseball season has finished after Monday night's loss to Oklahoma in the final of the Gainesville Regional. (Photo from @GatorsBB on Twitter)

The Last Gator Baseball Game of the Season

After a loss in a forced game 3 in the Gainesville Regional, the Gator Baseball season has come to a close with Florida finishing as the runner-up in the tournament. The last game of their season facing Oklahoma ended with them earning a 5-4 loss after a drawn-out game. Game 3 beginning at 1:00 pm EST commenced around 10:00 pm EST thanks to a 5 hour and 33-minute rain delay. The delay began at 3:12 pm in the top of the seventh inning when the Gators were left leading 2-1.

On the mound for Florida once the game was paused was Brandon Neely, pitching 6 2/3 innings, an arm that had been essential for the Gators all weekend. Only allowing four hits and one run, Florida was off to a strong start in Game 3. In the bottom of the second inning, DH Jac Caglianone hit a home run over right field to start things off for both teams. However, the Sooners weren’t far behind once Kendall Petits was able to tie the game after hitting a solo home run. In the top of the fifth, the Gators scored two more runs due to many defensive mishaps put into play by Oklahoma.

Once the game began after the delay, Ryan Slater took the mound for the Gators ending the top of the seventh by striking out Kendall Pettis. Florida created a 3-1 lead for themselves in the bottom of the seventh, with a sacrifice fly by Ty Evans. However, game 3 took a turn when the top of the eighth inning approached. The Sooners scored four runs off of right-hander Ryan Slater, taking the lead towards the end of the game, 5-3.

When the ninth inning rolled around, the Gators still had some fight in them. Wyatt Langford hit his 26th home run of the season in the bottom of the ninth. This ties the single-season school record, shared with Matt LaPorta. This pushed the final score of the game to 5-4. This final score advances Oklahoma to the Super Regional hosted by Virginia Tech and left the Gators as the runner-up in the Gainesville Regional.

The 2022 Florida Gator Baseball season has now come to an end after the last game was played on Monday. Florida ended their season 42-24, going 19-7 over their final 26 games.

Thank you, fans – for your support all season long. We’ll be back.#GoGators pic.twitter.com/pTDkevrmqU

Those left in the SEC advancing to different Super Regionals consist of Arkansas, Ole Miss, Auburn, Texas A&M, and Tennessee. Each team, as well as many of their opponents, will try to scrap their way into a ticket to Omaha.

A 2022-2023 sophomore at the University of Florida, Madison is studying Journalism, Sports and Media, with hopes to one day become a reporter and journalist. Madison graduated from IMG Academy in 2021, where she competed as a student-athlete running Track and Field. Madison loves all things sports and all things Gators!
@@madiwalkerr
Previous Gator Greats On CF Hall of Fame Ballot
Next Darvin Ham in, Quin Snyder Out