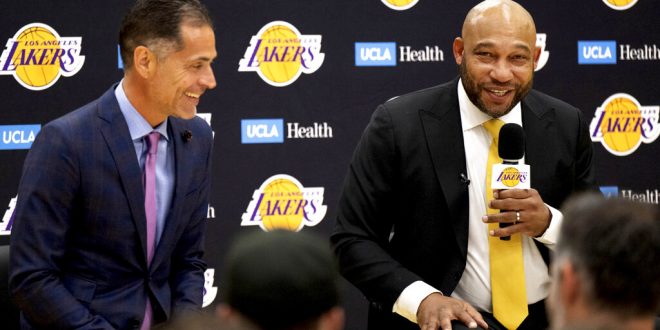 In one week in the NBA, Darvin Ham was named head coach for the Lakers and Quin Snyder resigned from the Jazz.

Darvin Ham was named as the head coach for the Los Angeles Lakers on Friday. He will replace former head coach Frank Vogel, who led the team to an NBA championship in 2020. Ham played in the NBA for eight seasons, spanning from 1996 to 2005. Ham won a championship with the Detroit Pistons in 2004. The Lakers are coming off of a disappointing season. The team had a 33-49 record and missed the playoffs. Despite this Ham is confident that the sky is the limit for the team.

Ham began his professional coaching career in 2008 for the Albuquerque Thunderbirds, an NBA G-League (D-league at the time) affiliate for the Dallas Mavericks and Miami Heat. He later served as the head coach for the team. In 2011, coach Ham joined the Los Angeles Lakers staff under then-head coach Mike Brown. Ham has a special feeling towards the organization where he started his coaching career.

In 2013, Ham joined the Atlanta Hawks coaching staff. He was an assistant coach that helped the 2014-2015 Hawks to a 60-22 record, and the No. 1 seed in the East. The team reached the eastern conference finals that season. In 2018, Ham joined Mike Budenholzer on the Milwaukee Bucks as an assistant. He helped Budenholzer earn the NBA coach of the year award after the team finished with a 60-22 record in the 2018-2019 season. In 2021, he contributed to the Bucks winning their second NBA championship in team history.

The Lakers are hoping to have found the right coach to lead them into the future.

After eight seasons as the Head Coach for the Utah Jazz, Quin Snyder is stepping down.

Synder felt that it was time for him and the Jazz to move forward.

The team enjoyed a 372-264 (.585) regular season record under Snyder during his tenure. He leaves as the second-winningest coach in franchise history. Snyder led the team to six consecutive playoff appearances. The team reached the Western Conference Semifinals three times during that span. He finished second in the NBA Coach of the Year voting in 2017-2018 to Mike D’Antoni of the Houston Rockets. In the 2020-2021 season, Snyder led the Jazz to a league-best 52-20 record. Snyder also coached an all-star game when he coached Team LeBron in 2021.

The opening leaves a large void to fill in the organization.