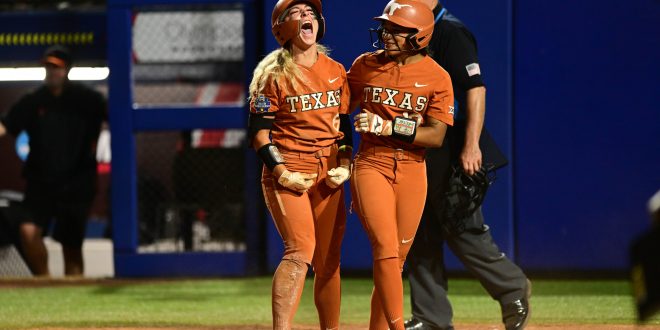 Texas becomes the first unranked team to reach the Women's College World Series final. The Longhorns will take on the Oklahoma Sooners. (Photo from @NCAASoftball on Twitter)

The Women’s College World Series is coming to an end as the last two teams, No. 1 seeded Oklahoma and unranked Texas, battle it out for the NCAA softball title. The two college softball teams will compete this week in the best-of-three WCWS Finals series to determine who will take home the title.

On Monday, Texas secured its ticket to the WCWS finals with a 6-5 win over Oklahoma State. After allowing Oklahoma State to score five runs in the first three innings, the Longhorns began their comeback in the fourth inning. On a streak, Courtney Day hit a three-run home run, bringing the Longhorns within three. An error by the Cowgirls in the fifth inning allowed three Texas runners, giving the Longhorns the 6-5 lead and win.

This is the first time an unseeded team has ever reached the WCWS finals.

Oklahoma has proved to everyone that even when they lose a game, they can come back bigger and better than ever. This was shown to be true on Monday when the Cowgirls suffered a 7-3 loss to No. 5 seeded UCLA, just to turn around and demolish them the same day 15-0. In the second game against the Bruins, Hope Trautwein pitched all five innings for the Sooners, striking out six batters. Jocelyn Alo recorded four hits in her four at-bats, with three runs and seven RBI.

The win was the largest win by a team in WCWS history and the Sooner’s 40th run-rule win of the season, twice as many as the next team in Division 1.

Texas, the only unseeded team to ever advance to the finals by going 6-0 in elimination games so far in the postseason, will challenge Oklahoma, defending national champions, starting Wednesday, June 8 at 8:30 p.m. Oklahoma will attempt to win their fourth championship in six years while Texas is looking for their first.