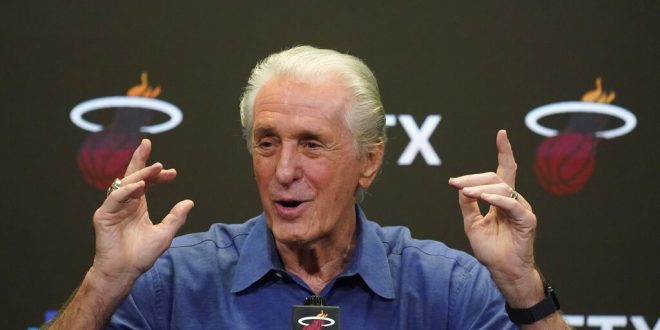 Miami Heat NBA basketball team president Pat Riley gestures as he speaks during his postseason news conference, Monday, June 6, 2022, in Miami. As is always the case, Riley is going into the offseason saying if there's a deal to be made and get Miami closer to a championship, he'll make it. (AP Photo/Wilfredo Lee)

The president of the Miami Heat Pat Riley, 77, expressed how he has no plans to retire this offseason. The Heat are coming off a Game 7 loss against the Boston Celtics in the Eastern Conference Finals. Pat Riley stated at the end-of-season press conference that he believes that this Miami Heat team is still built to win now.

Pat Riley became the president and head coach in 1995 for the Heat and served as the head coach from 2003 to 2008 with a year hiatus in 2004. In the press conference, he expressed how he felt about the organization and the players on the roster. Winning with this Heat team that is constructed is important to Riley. He is fully aware of the window that they have together and their ceiling. He knows what it takes and he has confidence in his players.

Age is not a problem

Riley has expressed how he is confident in his ability to be the president and that his age does not affect him in the slightest. Constructing the number one seed in the Eastern Conference this season shows his ability to create a successful team to this day. A notable move he made in his past was bringing Shaquille O’ Neal to Miami to team up with Dwayne Wade to win a championship in 2006. It is clear that his success has come from his hard work and keen basketball knowledge. Riley laughed at the idea of him being too old at the end-of-season conference.

Look back on this season

Although the season did not end in a championship Riley is extremely proud of the team. The Heat fought all the way down to the wire and just came one game short of the NBA Finals. He reflected on the season and is hopeful for the future of the team.