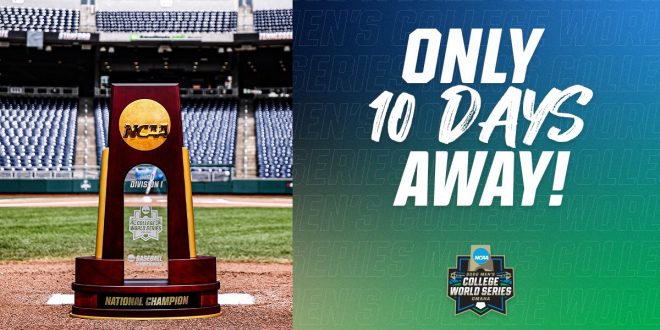 Five SEC schools remain in the NCAA Baseball tournament as the competition moves to Super Regionals. (Photo from @NCAABaseball on Twitter)

On Friday, June 10 the NCAA Super Regionals are scheduled to begin and will end on Monday, June 13. 16 teams qualified for the Super Regionals and there will be 8 winners of this best-of-3 series. Those winners will advance to the College World Series in Omaha, which starts on June 17 and finishes on June 27.

Other SEC schools, Georgia, Florida, LSU, and Vanderbilt did not qualify.

This will be the first time in five years that Texas A&M will appear at the Super Regional. The Aggies had a clean sweep during the College Station Regional. On Sunday they finished up with a win against Texas Christian, 15-9.

Tennessee also swept through their regional. The Volunteers beat Alabama State 10-0, on Friday, Campbell, 12-7, on Saturday, and Georgia Tech, 9-6, on Sunday. Georgia Tech lead the game until the ninth inning but then the Volunteers took the game away with a four-run ninth inning. For the second straight season, Tennessee will be heading to the Super Regional.

On Monday Auburn finished off their regional with a win against UCLA, 11-4, after having the regional final suspended due to rain. When the suspension took place, the Tigers were leading 9-0 in the sixth inning.

Ole Miss defeated Arizona on Monday, 22-6, and won the Coral Gables Regional. For the first time in program history, the Rebels were victorious in all three games of their regional outside of Oxford.

Arkansas punched their ticket to the Super Regional on Monday after beating Oklahoma State, 7-3. This will be the fourth consecutive time this team has advanced and the 10th time in program history.