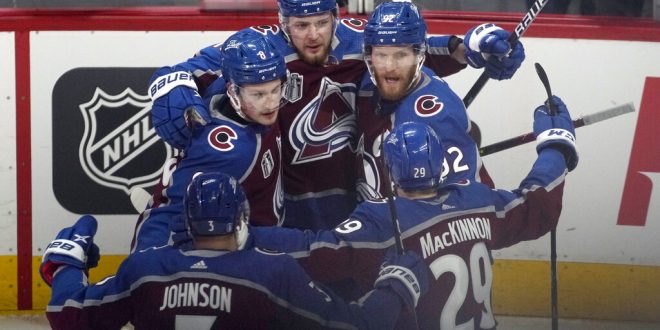 The Tampa Bay Lightning and Colorado Avalanche went head-to-head Sunday in Game 6 of the Stanley Cup Finals with the Avalanche pulling out the win and they are now the 2022 Stanley Cup champions.

The Avalanche had not won a Stanley Cup Finals since 2001.

The Lightning seemed to be okay in the first period, Steven Stamkos scored his 11th goal in the postseason giving the Lightning a lead on the Avalanche, 1-0. During the second period, the Avalanche made it tough for the Lightning to try and keep the lead and take home the win.

Artturi Lehkonen scored the final point in the second period. From there on out. the Avalanche kept the score at 2-1 and held tough defensively against the Lightning, allowing only 3 shots on goal during the third period.

Lightning captain Stamkos said, “This core is here. We’ve battled. We’ve been through everything you can think of and, for the most part, we’ve found a way to come out on top.”

Defensive player, Cale Makar was awarded the Conn Smythe Trophy for most valuable player. “I felt like throughout this whole game, our mentality was just win that period and win the next one, get the next shift and so on, and we were never looking too far ahead to the outcome and we definitely feel like we earned that one.”

In a postgame interview, Makar explains how he feels honored.

Star center Brayden Point has been out for the last two games of the postseason. Point sustained a lower-body injury in Game 7 against the Toronto Maple Leafs. Lightning players, Anthony Cirelli and Erik Cernak played through injuries among a few other Lightning players.

Pat Maroon said after the game regarding the injuries. “When the injury report comes out, you’re going to be shocked.” He continues and talks about how proud he is of the team and how far they have come. “I’m just so proud of these guys for what these guys have done in the past three years. We made a hell of a run. We just fell short.”