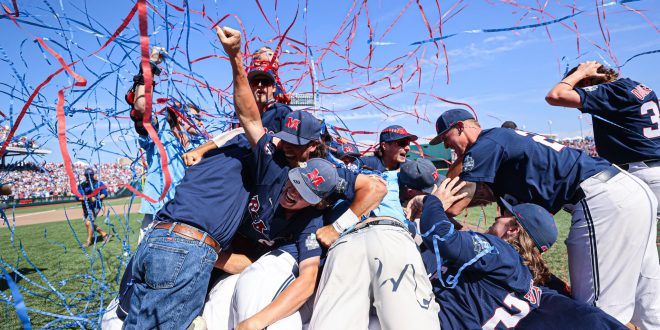 Ole Miss celebrates with a dogpile after striking out the last three Sooners to secure their title as the 2022 Men's College World Series National Champions.

Twice is the Charm for Mississippi

The state of Mississippi slept soundly last night as they brought home another ring from the Men’s College World Series. After Mississippi State secured the championship in 2021, Ole Miss decided just one wasn’t enough for their home state, bringing home the title and some new jewelry in 2022.

Ole Miss and Oklahoma played in Game One of the three game series on Saturday, June 25th. The Rebels demonstrated dominance at the plate and on the mound throughout the entire night of Game one, taking a home a huge 10-3 victory.

At the plate, power was on display for Ole Miss as they hit four home runs, with three being back to back to back in the eighth inning. One of their athletes, Calvin Harris, hit a four hundred and thirty foot moonshot over right-centerfield. Their hitters were able to secure 16 hits that Saturday night in Omaha, Nebraska.

However, a World Series can’t be won without solid pitching, and Ole Miss had that in the opening game of the finals.  The night began with sophomore Jack Dougherty, having a perfect game through six innings, some called him “unhittable.” Striking out five consecutive batters, Dougherty was hot until finding himself in a bases loaded jam in the seventh, where teammate and true freshman Mason Nichols was called in to successfully get them out of the potentially detrimental situation.

Ending the game with a win, Ole Miss was still hungry, and wanted more from “OLEmaha.”

In Game two, Oklahoma wanted to show their opponents that taking this title from them wouldn’t be so easy. With strong arms for both teams on the mound, true freshman Hunter Elliott for Ole Miss and redshirt freshman Cade Horton for Oklahoma each contributed five scoreless innings to start the game.

In the sixth inning, Ole Miss’s Jacob Gonzalez homered to give the Rebels the lead.  However, the Sooners were not having another blowout on this Sunday afternoon, as in the top of the seventh, Jackson Nicholas hit an RBI double to score Jimmy Crooks, tying the game. Then Kendall Pettis scores off a bases-loaded walk, putting Oklahoma on top in the seventh.

#Sooners score two runs and take a 2-1 lead at the stretch. pic.twitter.com/ULMpdSY97O

When the bottom of the eighth rolled around, the Rebs refused to give up their momentum. Fighting for a way to the top, Ole Miss grabbed their opportunity when Oklahoma pitcher Trevin Michael entered the game. Scoring to tie the game off of back-to-back-to-back singles, the Rebels needed something more. Then – a miracle happened; Ole Miss’s Justin Bench scores off a wild pitch.  Next – a second miracle; Gonzalez scores off of a second wild pitch, and Ole Miss takes a 4-2 lead.

Next up is the top of the ninth, the Sooners needed to make something amazing happen to keep the series alive, but Brandon Johnson refused to let that happen. Johnson in relief struck out the side to give Ole Miss the win and the College World Series championship.

After perhaps being the last team to make it into the NCAA Tournament field, Ole Miss became improbable national champions.  This was a classic case of a team getting hot and confident at the right time and they used that momentum all the way to the end.

Alexa, play “We are the Champions” pic.twitter.com/ABBeUvUvIy

A 2022-2023 sophomore at the University of Florida, Madison is studying Journalism, Sports and Media, with hopes to one day become a reporter and journalist. Madison graduated from IMG Academy in 2021, where she competed as a student-athlete running Track and Field. Madison loves all things sports and all things Gators!
@@madiwalkerr
Previous Colorado Avalanche Stop Lightning Three-Peat and Take Stanley Cup in Game 6
Next Gators Lose QB to Miami