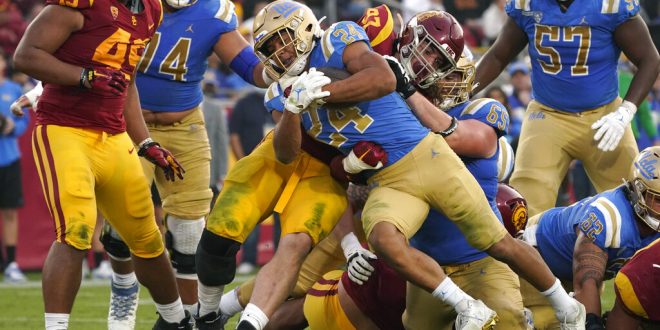 UCLA running back Zach Charbonnet (24) runs the ball in for a touch down as Southern California defensive lineman Jacob Lichtenstein (97) tries to stop him during the second half of an NCAA college football game Saturday, Nov. 20, 2021, in Los Angeles. UCLA won 62-33. (AP Photo/Mark J. Terrill)

The era of super conferences in the NCAA has begun.

Following reports that USC and UCLA were leaving the Pac-12 to join the Big Ten, the conference confirmed the moves through a statement released late Thursday night. Big Ten members unanimously accepted both schools. Additionally, both schools plan to join the Big Ten beginning in the 2024 season, according to the announcement.

Breaking: USC and UCLA are considering leaving the Pac-12 for the Big Ten as early as 2024, a source confirmed to ESPN.

Following the announcement, the Pac-12 released a statement expressing the conference’s disappointment with the schools’ departure.

With the move, the Big Ten will become the first 16-team conference in Division I since the Western Athletic Conference in 1999. Meanwhile, the Pac-12 will drop back down to 10 teams for the first time since 2011.

With the schools’ move from the Pac-12, two conferences now stand above the rest: the SEC and the Big Ten.

ESPN’s Heather Dinich said USC and UCLA’s move to the Big Ten along with Oklahoma’s and Texas’ move to the SEC separates the two conferences from the rest in the NCAA.

On July 27, Oklahoma and Texas applied to join the SEC following reports that the schools planned to leave the Big 12. The SEC unanimously accepted the two schools three days later, creating what many called the first “super conference” in the NCAA. Texas and Oklahoma will join the SEC in 2025, putting the conference at 16 teams.

Despite the sudden changes in college sports, many believe that the Big Ten may not be done expanding. ESPN’s Rece Davis said schools such as Oregon and Washington may want to leave the Pac-12.

Jon Wilner of The Mercury News, who broke the news of USC’s and UCLA’s departure, listed a few possible schools the conference may target, which includes two ACC schools and an SEC school.

If I'm the Big Ten and I want to get to 18, the short list is Washington, Oregon, UNC, Duke … and Missouri

The Pac-12 and the ACC are the only two power-five conferences to not add any schools so far, but many expect that to change. A hot commodity is Notre Dame, who may be targeted by the ACC due to affiliation.

As the conferences continue to realign, the debate for playoff expansion in college football continues. In September, the NCAA planned to vote on playoff expansion, but could not come to an agreement. In February, the NCAA decided to not expand until the current contract expires in 2025.

Outside of the power-five, Conference USA is also dealing with changes.

In October, the AAC announced the additions of Charlotte, Florida Atlantic, North Texas, Rice, UAB and UTSA. The official date for membership is to be determined. Additionally, Marshall and Old Dominion moved to the Sun Belt this offseason, joining former FCS member James Madison.

The days of power-five and group-of-five conferences are over and, in steps super conferences versus everyone else.