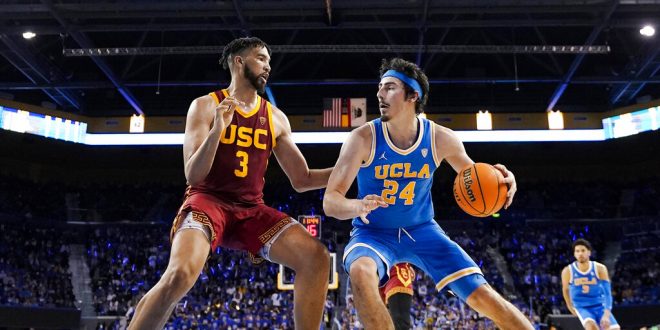 FILE - UCLA guard Jaime Jaquez Jr., right, tries to get by Southern California forward Isaiah Mobley during the second half of an NCAA college basketball game on March 5, 2022, in Los Angeles. UCLA and Southern California are planning to leave the Pac-12 for the Big Ten Conference in a seismic change that could lead to another major realignment of college sports. A person who spoke to The Associated Press on Thursday, June 30, 2022, on condition of anonymity because the schools' talks with the Big Ten have not been made public said the schools have taken steps to request an invitation to join the conference. (AP Photo/Mark J. Terrill, File)

Two of the top PAC-12 powerhouses, USC and UCLA, were informed on Thursday night that their applications to join the Big Ten were accepted. The two schools will officially join the conference in 2024.

A few months ago Oklahoma and Texas made the move to the SEC. Now USC and UCLA made a move of their own. Now that the ball has begun rolling, there’s no stopping it.

We are well on our way to the era of college sports and super conferences. After USC and UCLA made their announcement, there have been rumors that Oregon and Washington may be the next schools to make a move.

Along with the exception of Notre Dame, which historically has not been a part of a conference for football, may also find themselves a home.

Conferences, such as the PAC-12, have now found themselves on life support thanks to this new trend. With schools moving ships to other conferences in hopes of creating a super conference, this leaves the mid to lower-level conferences gasping for air.

Additionally, the PAC-12’s current media rights are set to expire in 2024, the same year the two schools are set to depart. To stay intact, these conferences are going to have to scramble to secure stability.

Early Bird Gets the Worm

It is going to be hard to leave some teams out with this new era of college sports.

There is still a lot unwritten about the future of college sports, but change is happening now nonetheless.

A third-year journalism student with a focus in sports and media.
@kylecurtisss
Previous The era of super conferences: USC and UCLA leave for Big Ten
Next Lon Kruger Reacts to Hall of Fame