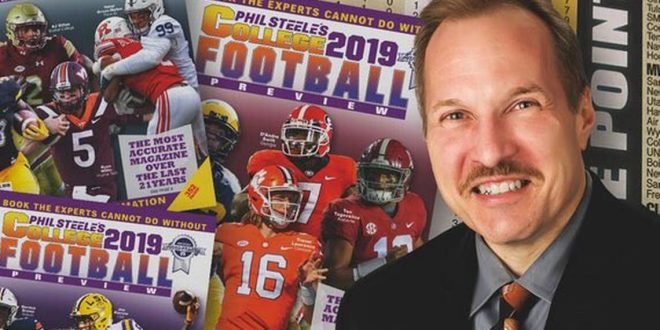 When asked about the current state of College Football, Steele admitted that it is shocking to see USC and UCLA leave the PAC-12 for the Big-10, as it was with Oklahoma and Texas going to the SEC. However, he acknowledged that college football as we know it is evolving into a completely different game.

Steele said that five years ago, he thought there would be five 16-team conferences, but now it looks like two or three super-conferences with 20 teams each.

To no one’s surprise, Steele labeled the SEC as the best conference in college football.

He predicts that Georgia, Florida and Tennessee will finish as the top three SEC East.

Steele also listed the Gators as his #2 most-improved team.

Three years ago, Steele had UF as the most improved team going into the 2019 season. They lived up to the hype after an 11-2 season capped off by a victory over Virginia in the Orange Bowl.

Fast forward to 2022, Steele says he’s high on Billy Napier coming into this year after the great job he did at Louisiana. He says that Napier has the weapons to fit his system, complementing Anthony Richardson as a dual-threat quarterback that fits Napier’s system perfectly.

Steele spoke highly of the Gator’s backfield and improved offensive line, which he ranked as number 21 heading into the season.

When talking about the defense, Steele said that there is too much talent to play how they did down the stretch last season.

In SEC play, Florida was +65 yards per game, which Steele said usually translates to 6-2 or 5-3. Although their conference record was 2-6, Steele feels that Napier will come in and fix the attitude.

When asked about Florida’s opponent for their season opener, Steele said that he is very high on Utah. He felt that the Utes became a different team last season once they brought in Quarterback Cam Rising, ranking them as a top-10 team on both sides of the ball. Steele feels that they might be favored in all 12 of their games, and thinks that they could sneak into the playoff, despite what people think of the PAC-12.

Steele also listed the Pittsburgh Panthers to be his number one surprise team. Despite losing Kenny Pickett and Jordan Addison, Pat Narduzzi is extremely high on former USC transfer QB Kevin Slovis. Steele also mentioned Konata Mumpfield as a name to watch as he looks to fill the void left by Addison. He predicts the Panthers to be favored in every game except when they travel to Miami towards the end of the season.

Lastly, Steele expressed confidence in Notre Dame. He loved how the team bonded over the hiring of new head coach Marcus Freeman. Steele believes that the Fighting Irish should be a preseason Top-10 team, despite a tough schedule that starts at Ohio State and ends at USC.