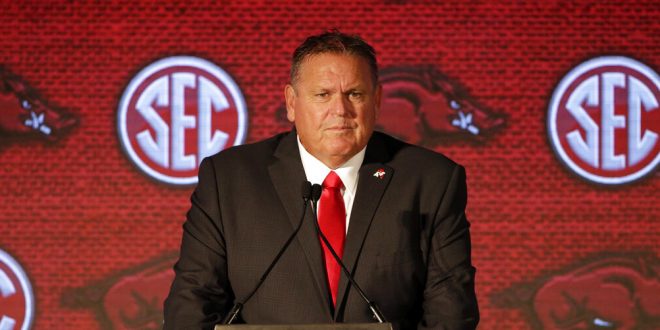 Arkansas football Head Coach Sam Pittman has done what many deemed to be impossible in two years. Before Pittman arrived in Fayetteville, the Razorbacks suffered three straight losing seasons. Evidently, it only took Pittman one year to rebuild a struggling program. In Pittman’s inaugural season in 2020, the Razorbacks went 3-7. In 2021, the Razorbacks completely flipped the script, not only with a winning season, but boasting a 9-4 record and a trip to a bowl game for the first time since 2016.

In the Outback Bowl, the Razorbacks defeated Penn State 24-10. Arkansas concluded the season ranked No. 21 in the country.

Pittman preaches physicality. His game plan aims for 300 rushing yards per game built around strong running backs. Deemed as one of the best offensive line coaches in the country, Pittman emphasizes the importance of having a physical offensive line that opens up opportunities for the running backs and quarterback to make plays.

The Razorbacks’ physical style of play doesn’t just appear on game day. With so many factors out of their control on Saturdays from weather to stadium environment, the Razorbacks replicate the factors within their control, like physicality, in practice.

The Razorbacks lost top receiver Treylon Burks, who earned First-Team All-SEC honors in 2021. With 11 touchdowns and 66 catches for 1104 yards, Burks cemented his name in Arkansas history as the fourth Razorback to tally 1000 receiving yards in one season.

Pittman doesn’t expect one player to take over the hole Burks left in the offense. He is optimistic that a handful of players will step up this season, including Oklahoma transfer Jadon Haselwood, Ketron Jackson Jr., and Warren Thompson.

Introducing the highest rated recruit in the modern recruiting era to ever play for the Razorbacks. Let's go @jadon_haselwood! pic.twitter.com/Ox76j5E49e

Next Steps for Arkansas

The Razorbacks’ 2021 season was highlighted by an unexpected close game against Alabama. At the end of November, Arkansas traveled to Tuscaloosa to take on the No. 2 ranked Crimson Tide. The Razorbacks advanced within six points of Alabama in the fourth quarter. Despite falling to Nick Saban’s squad 42-35, the loss sparked confidence in Arkansas moving forward.

Coming off a nine-win season puts pressure on the Razorbacks to deliver an equally successful or more successful 2022 season. Grasping a ten-win season is no easy task; Pittman speaks on the challenge of adding wins to the Razorbacks’ record this season, especially in the SEC West.

Arkansas opens its season with three home games against Cincinnati, South Carolina and Missouri State before traveling to AT&T Stadium in Arlington, TX, to take on the Texas A&M Aggies. The Razorbacks return to Fayetteville for a rematch against the Crimson Tide on Oct. 1.