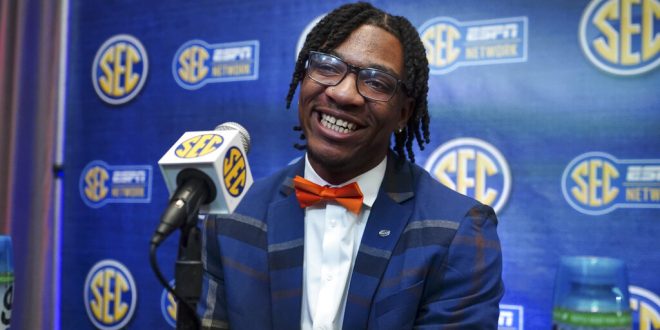 Starting off the season, the Utah Utes travel to the Swamp for the first time in history to face the Gators.

Miller was referring to former Gator linebacker Mohamoud Diabate, who transferred at the start of the year.

“It’s going to be a hard fought game for sure,” said offensive linemen Richard Gouraige. “Respect to that program. We just got to control what we can control.”

When discussing the shortcomings of last year and how to avoid them, Richardson said things will be different due to the bond the players share.

Richardson also said the team, the coaching staff, and himself are not looking into expectations too much and are taking things one day at a time.

Napier has introduced two offensive line coaches to the staff. While a bit unusual, Gouraige said things have been working well.

Speaking on accountability, Miller said coach Napier is pushing the topic on players.

“Coach Napier has done a great job just emphasizing accountability, also with teamwork, bringing the team together. He’s emphasized better relationships and I feel like that’s a big thing that he’s brought in,” said Miller.

Florida vs. LSU: and an emerging rivalry

An intense rivalry is emerging between the Gators and Louisiana State Tigers. Speaking of the Tigers, Gouraige said they may be the biggest game of the year.

Rounding out the conference for Florida, Gouraige was able to step into his media shoes and asked Richardson a question: Who’s the best dressed? Richardson was not shy to respond.

“When it comes to putting on a suit, imma say I’m top two but I’m not number two. Richard Gouraige, that’s a runner up. Shoutout to that guy.” pic.twitter.com/2VTbglhtOD

Matthew Bell is a senior at the University of Florida. He completed his associates degree at State College of Florida in Bradenton and transferred to UF in 2019. His favorite sports are American football and baseball. Matthew also contributes to The Point Podcast and provides local hourly news for All Things Considered.
@@pod_mattb
Previous Arkansas Football Head Coach Sam Pittman Talks Physicality and Wins at SEC Media Days
Next Mark Stoops Talks Kentucky Football at SEC Media Days