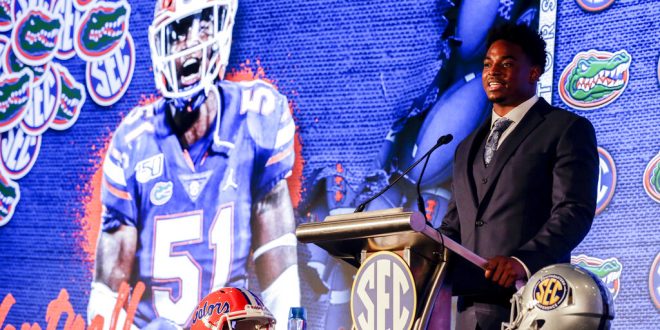 Following the conclusion of the 2022 SEC Media Days, writers named five Gators to the All-SEC Preseason Team. The Alabama Crimson Tide led the way with 20 selections.

The newest member of the Florida Gators offensive line is a mauler. OG O’Cyrus Torrence taking on 90 here. pic.twitter.com/dQKy3fqqeD

Linebacker Ventrell Miller received All-SEC preseason third team honors. Miller missed most of what would have been his redshirt senior season after tearing his biceps tendon during Florida’s win over USF. The linebacker, who attended the same high school as pro football hall of famer Ray Lewis, led the team in tackles in 2020 with 88.

Defensive lineman Gervon Dexter received third team honors. The former five-star recruit finished last season with 51 tackles. Dexter started nine games last season, up from two starts during his freshman season. The rising junior is not the only man carrying his name this season. Dexter welcomed a baby boy to his family on May 9.

Previous Jimbo Fisher Talks Texas A&M
Next Rays, Marlins and Braves all Back in Action After the All-Star Break