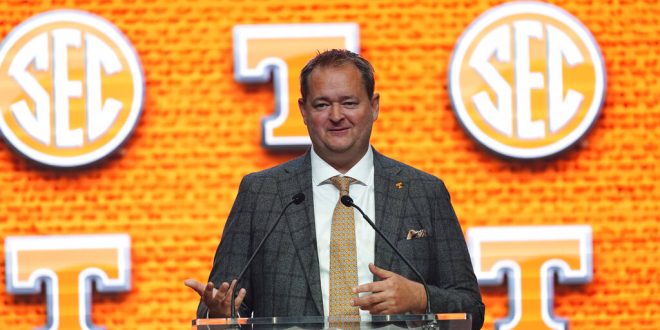 As the Tennessee Volunteers approach the 2022 season, head coach Josh Heupel previewed his team at the SEC Media Days on Thursday.

That's a wrap from #SECMD22

Wheels up for Rocky Top 🍊 pic.twitter.com/XWYVxxKJip

Change in Culture Under Heupel

A major focus in Heupel’s early tenure has been shifting the focus within the program after a combined record of 16-19 during the three seasons under Jeremy Pruitt. Despite a 7-6 record in 2021, Tennessee won three of its final four regular season games, including an upset shootout over ranked Kentucky, to become bowl-eligible.

Heading into year two in Knoxville, Heupel said he can see the culture shifted between last season and this season. Specifically, he said the accountability and leadership has dramatically changed throughout the team.

Additionally, the team impressed Heupel with their growth off the field, saying his players have bought into the idea that off-field actions relate to output on the field.

Arguably the face of the Tennessee football program is quarterback Hendon Hooker, who returns for his second season as the starter. After transferring from Virginia Tech, Hooker threw for 2,945 yards and 31 touchdowns in 2021.

Heupel said there are many ways to describe Hooker, but he’s most impressed with his composure and confidence.

Over the course of Heupel’s first two years on the job, Tennessee has welcomed a total of 17 transfers to the program, including Hooker in the 2021 class. Specifically, seven of those came in the 2022 recruiting class.

However, because the depth of the roster is not quite where Heupel wants it to be, he said these additions have an early opportunity to earn playing time.

Headlining this year’s additions is Bru McCoy, a former five-star wide receiver who transferred from USC. However, he class of 2019 recruit had a back-and-forth recruitment and first season in college where he signed and enrolled at USC before transferring to Texas in less than a month. Five months later, McCoy transferred back to USC.

After only recording 236 yards and two touchdowns in his time with the Trojans, McCoy entered the transfer portal on Jan. 13, 2022 before transferring to Tennessee four months later. However, the NCAA has not cleared McCoy to play just yet due to eligibility rules. Either way, Heupel said he and the coaches are excited for what McCoy brings to the table.

Additionally, Tennessee is projected to finish third in the conference behind Georgia and Kentucky in the SEC preseason media poll.

Cam is a fourth-year broadcast journalism sports and media major at the University of Florida. In addition to writing and recording radio trendings for WRUF, Cam covers North Florida HS football for The Prep Zone and Mainstreet Daily News and UF football and basketball for Inside the Gators.
Previous Mark Stoops Talks Kentucky Football at SEC Media Days
Next Bryan Harsin Talks Auburn Football at SEC Media Days

With 4 weeks of SEC play under the belt, ranking the performances of SEC quarterbacks …