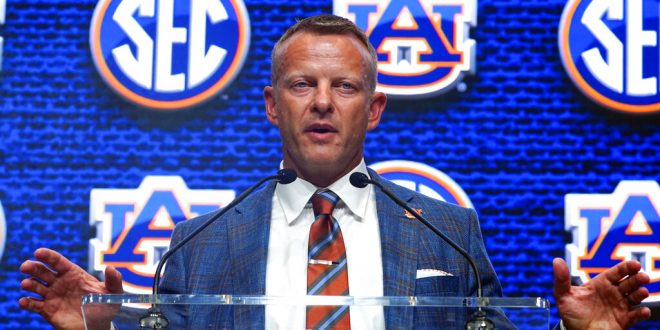 The SEC Media Days came to a close after Day 4 on Thursday, with three more programs taking to the podium to talk about the upcoming football season. Auburn Head Coach Bryan Harsin was joined by Tank Bigsby, Derick Hall, and John Samuel Shenker to discuss the Tigers’ offseason and moving on from the past to look forward.

Moving on From the Past

Coming off a disappointing season for the Auburn Tigers, Head Coach Bryan Harsin’s job security was in question after just one season with the team. The university launched a 10-day inquiry on Harsin after an exodus of players and coaches following the season, including starting QB Bo Nix.

Among the departed staff are newly hired offensive coordinator Austin Davis, who resigned for personal reasons, and defensive coordinator Derek Mason, who left for Oklahoma State. This exodus came after Auburn opened the 2021 season 6-2 before dropping their last five games of the season to finish 6-7.

Despite his coaching in question, the inquiry was left unfounded, and Harsin’s position remained. When speaking to the press, Harsin wanted to put all the rumors to rest.

Harsin finished any further questions on the inquiry with a quip of his own.

“If you want any more information on it, just Google it.”

Harsin is entering his second season as head coach after going 6-7 last season, including a five game losing streak to end the year. However, there is hope with this season around the corner.

Coach Harsin had this to say about moving forward:

Auburn players also had thoughts on the school’s future. Tight End John Samuel Shenker had this to say about Harsin following a down year last season:

“When he came in, he has one way of doing things, [and] he was successful where he was before. So when you have a guy that’s that successful, it’s just a buy in and see what lies on the other side. And last year we didn’t fully buy in.”

Now with a new staff and mission, the team looks to turn things around.

Tank Bigsby returns for the Tigers, looking to find more success after a strong 2021 season. Bigsby finished the year a a top 5 running back in college football. He rushed for 1,099 yards and 10 touchdowns on the season.

EDGE rusher Derick Hall also returns, looking to earn his place a potential first-round pick in next year’s NFL Draft. Hall finished the 2021 season with nine sacks and will have his usage increased significantly for the upcoming season.

Bigsby and Hall were named to the All-SEC first team at the SEC Media Days.

Auburn is still looking for its starting quarterback however. Following the departure of third-year Bo Nix, T.J. Finley, Zach Calzada, Robby Ashford and Holden Geriner compete for the starting job. Coach Harsin looks for more competition from the candidates, not rushing the decision on who will start.

The Auburn Tigers open their season at home against Mercer on September 3.