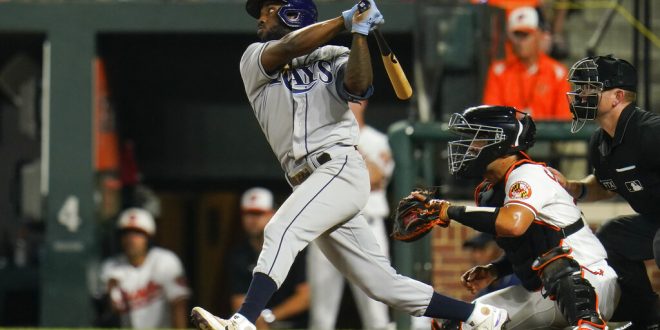 Rays End Skid, Look to Even Series in Baltimore

The Tampa Bay Rays had dropped four straight heading into Wednesday night’s tilt with the Orioles. It looked to be five straight after Jorge Mateo tied the game in the bottom of the ninth.

That was until Randy Arozarena came through with a 2-run double in the tenth to push the Rays past the Orioles, 6-4.

Dealing with the 4-game losing streak, and a struggling Tyler Wells on the mound for the Orioles, the Rays looked to gain some momentum early.

And that’s exactly what they did. Thanks to home runs by Ji-Man Choi and Luke Raley in the first two innings, Tampa Bay found themselves up 3-0.

The Orioles almost immediately reciprocated, with two runs in the bottom of the second and third innings.

The first run came off of a Rougned Odor single which drove in Anthony Santander. The second was a lot more unconventional and came across via a Drew Rasmussen wild pitch in the third.

The Rays managed to grab one run back in the fifth inning thanks to a Yandy Diaz double. He ended with three hits on the day.

Once again, however, Baltimore pushed right back.

A throwing error credited to Raley allowed the Orioles to cut the deficit back to one run.

It stayed that way heading into the bottom of the ninth.

The Rays were two outs away from a win and putting their four-game losing streak behind them.

That was until Jorge Mateo put an 0-1 pitch into the right-center field bleachers with one out in the inning to force the game into extras.

The Rays managed to get out of the ninth with no further damage but found themselves back against the wall.

Tampa Bay faced a fifth straight loss and a series loss to Baltimore.

However, Randy Arozarena stepped to the plate with the bases loaded and no outs in the tenth and made sure that the Rays’ skid ended.

A two-run double for Arozarena put the Rays back up 6-4.

Pete Fairbanks came in for the bottom of the inning and pitched a perfect three outs to earn the save and put the Rays back into the win column.

After a back-and-forth Wednesday night showdown, the two sides will meet for the fourth and final game of the series Thursday afternoon.

The Rays moved just one game back of second place in the AL East with the help of the St. Louis Cardinals who defeated the Blue Jays Wednesday.

As for the Orioles, they fall back to the .500 mark but remain in fourth place in the division. They sit just .5 games ahead of the struggling Boston Red Sox.

Thursday’s series finale is pretty important for both of these sides, as they each look to gain ground in what many claim to be the toughest division in baseball.

Ryan Yarbrough (0-5) will take to the mound for the Rays in hopes of recording his first win this year. He will be facing off against Jordan Lyles (6-8).

First pitch from Camden yards is set for 12:35.