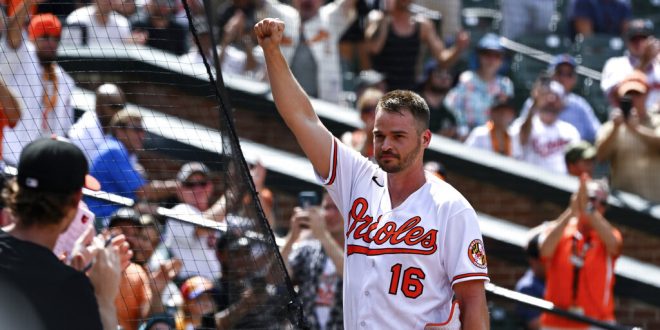 The Tampa Bay Rays fell to the Baltimore Orioles Thursday 3-0, dropping the series after late-night heroics in the game prior. Now, the Rays have lost five of their last six games and sit at third place in the AL East. As of Friday, Tampa holds the final Wild Card spot just 2.5 games ahead of the Cleveland Guardians, their next opponents.

Mancini Takes in the Moment

Baltimore was carried by a strong outing from designated hitter Trey Mancini. In the bottom of the sixth inning, the Orioles slugger hit what seemed to be a routine flyball to right field. However, after Rays’ Josh Lowe lost the ball in the lights, he rounded all the bases for an inside-the-park home run to put the O’s up 3-0.

Mancini played in what could be his last game in Oriole Park at Camden Yards with the MLB Trade Deadline just days away. The longtime Oriole took it all in as the Baltimore fans gave Mancini a standing ovation before the top of the ninth.

“It meant a lot,” he said. “Again, I have no idea what the next few days bring, but I wanted to make sure to soak in every moment today, just in case this was it.”

It was a rough night for the Rays as the Orioles took advantage of Tampa Bay’s poor play. The Orioles struck first in the third inning as Anthony Santander doubled home a run to put Baltimore up 1-0.

Then in the bottom of the sixth, Mancini extended the lead to 3-0 off an inside-the-park home run. The Rays were unable to mount a comeback as the team blanked to end the game.

Jordan Lyles picked up the win for Baltimore with four strikeouts and three hits in 5 1/2 innings pitched. Lyles moves to 7-8 on the season.

Ryan Yarbrough was charged with the loss for the Rays, moving to 0-6 on the season.

With the loss to Baltimore Thursday night, the Rays find themselves sitting in the final Wild Card spot for the MLB Playoffs. The Rays travel back home to face the Cleveland Guardians next, beginning their three-game series Friday night.

This is a crucial series for the Rays as they sit just 2.5 games ahead of the Guardians in the Wild Card picture. Tampa Bay will also look to regain momentum in the season after dropping five of their last six games.

Cleveland’s ace Shane Bieber will take the mound as the Guardians hope to pull ahead in the playoff picture.

Jeffrey Springs will get the start for the Rays, looking for that spark to put the team back on track.