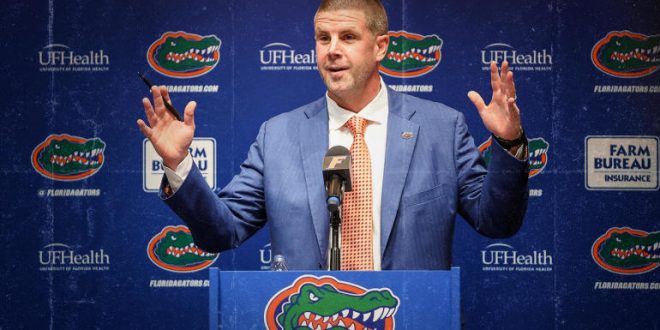 The Florida Gator football team began their fall camp on Tuesday. Players and coaches, including head coach Billy Napier, spoke to the media. Napier is excited to get started in his first fall training camp with Florida.

Coach Napier is ready to see how his team will look in these first few days of training camp. As they practiced in the summer, the players and coaches had to familiarize themselves and build comradery.

Now that fall camp has started, Napier is seeing that the veteran players are helping the new guys get used to the life of being a college football player.

Napier feels like this fall training camp is going to be very important for his team. He thinks that if they are going to be successful, they will need to put in the work in the next three weeks ahead of the season opener.

Napier knows how critical this buildup to the season is. He also knows that it is not going to be easy on anyone. This includes the players, coaches, equipment staff, and everyone else involved in the football program.

“It’s a critical time of the year. We want to work really hard, but we’re going to work smart.”

Not only will Napier push his players to be the best that they can during fall camp, but he will do the same to his staff as well. While this is one of the most important times of the year for any college football program, it is one of the toughest as well. Napier eluded to this in his statement.

Napier knows how important it is to keep improving, and that’s exactly what his team is doing.

He feels that the only way this team will improve is if they come together as a whole. Napier said that the players were able to do this in the summer, but now is when it gets more serious. The coaching staff have implemented many different strategies in order for the players to get to know each other.

Coach Napier and company have held little games for every guy on the team to get to know everybody’s names and hometowns. They have also shuffled up the locker room so players aren’t next to the same guys all year long. Because of this comradery that is being built, Napier feels like the team will be able to play to the best of their ability.

Quarterback Anthony Richardson is going into his redshirt sophomore season in 2022. He split reps with now Arizona State man, Emory Jones, last season. He is now looking to take the helm at the QB position for the Gators.

Being the starting quarterback for the Florida Gators comes with lots of eyes and ears on you at all times. This is no different for Richardson. There has been a lot of pressure put on him by the media.

Napier feels that Richardson blocks out all the noise and is focused on improving himself and his teammates to help this team win a championship.

Coach Napier is going to push his players hard this fall camp to make sure they are ready for the season opener September 3rd against Utah.

Hugh is a second year student majoring in Journalism: Sports and Media at the University of Florida.
@HGreen_15
Previous Brady Gearing Up for the Season at Buccaneers’ Training Camp
Next Dolphins Lose Picks and Owner Amidst Tampering Allegations