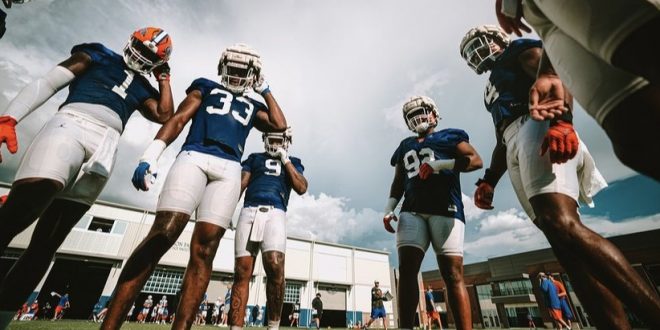 The Florida football team returned to fall camp on Monday to continue preparation for the team’s first season under head coach Billy Napier. The Gators were back in the indoor practice facility, marking their third consecutive day in the complex. Below are some of the biggest takeaways from the media viewing portion of Day Five of fall camp, with a focus on the linebackers.

Dedication from the Defense

Florida linebacker Amari Burney shared how dedicated the defense has been during fall camp.

The energy that Burney has noticed from the defense was certainly evident among the linebackers during Monday’s practice.

Upperclassmen Ventrell Miller and Burney continue to lead the inside linebacker unit. The two are the first to complete every drill and are the projected starters for the Gators this season.

Burney related how he and Miller shared a moment on their last first day of fall training camp. “We had a little smile about it, but then we just went out there and worked,” Burney said.

On Monday, Miller and Burney were observed successfully executing drills with the precision and fluidity that inside linebackers coach Jay Bateman was quick to compliment.

Miller and Burney are followed in drills by freshman Shemar James and sophomore Derek Wingo. James and Wingo could be the backups for the Gators this season. Burney had the following to say about the importance of senior leadership and how he and Miller have taken James under their wing during camp.

On Monday, both James and Wingo were asked to complete a second rep on a few of the drills in order to correct mistakes in technique and footwork that were made during their first run of the drill. However, it is worth noting the progression that these two linebackers have made in their athleticism since the spring.

While James is still perfecting his ability to key the run, this is an area where Wingo particularly shines. Wingo also demonstrated his abilities in block shedding during Monday’s chute drills. However, James showed his strengths during the gap-shooting reps.

Burney shared how Wingo has been “putting in a lot of work…he’s very decisive with his movements now, he knows what his job is, so he’s moving way faster than he was in the past.”

Jeremiah ‘Scooby’ Williams and Diwun Black complete the scholarship linebacker room. The two may exercise the highest degree of athleticism among the group.

With the absence of depth in Florida’s linebacker unit, it is promising to see the potential of experienced returning players as well as rising talent.

Brenton Cox Jr. leads the OLB unit with confidence. Cox led the team during the 2021 season with 8.5 sacks and 14.5 tackles for loss. The recent graduate is eager to reach his full potential in his final collegiate year with the Gators. Burney spoke on how Cox has really come out of his shell after stepping into a leadership role.

“He’s very vocal. I think he’s, if I’m not mistaken, he is the oldest guy in the room, so he has to be vocal now. There’s no ifs, ands, or buts about it,” Burney said.

Cox demonstrated these qualities during Monday’s media viewing period as he led the outside linebackers through every drill with ease.

#Gators OLB working on pass rush drills. Cox and Summerall III with an outside swat, Reese with a speed rush, and Farmer with a quick swat arm over. pic.twitter.com/tMvsCG7jCV

Cox was followed by Lloyd Summerall III who is embracing the coaching of outside linebackers coach Mike Peterson. After putting up a strong performance with only one poorly executed rep, Summerall quickly made the correction given by Peterson. Summerall was followed in the lineup by David Reese and Antwuan Powell-Ryland Jr.

Burney spoke on the impact Reese has had on the team since returning from his injury. “He came back with a smile on his face, right when he got back he was ready to work,” Burney said. He added how Reese stepped in while Cox was at graduation and even made a couple of plays.

It will be exciting to see what these Gator linebackers are able to accomplish during the remainder of fall camp and the upcoming season.

#Gators OLB taking the inside rush after the tackle over sets during drills with Mike Peterson pic.twitter.com/DNzbi80EOB

Three defensive players remained on the sidelines completing agility drills, riding stationary bikes, and stretching. These included cornerback Jaydon Hill, safety Rashad Torrence II, and defensive end Tyreak Sapp. Hill has yet to practice with the Gators this fall after suffering a knee injury before the start of the 2021 season.

Additionally, tight end Jonathan Odom and offensive lineman Richard Gouraige wore non-contact jerseys during Monday’s viewing period. Odom is continuing his recovery from shoulder surgery due to a torn labrum from the spring. However, Odom is looking good at practice and is expected to be cleared for this season. Gouraige did not participate in any of Monday’s drills.

Ellie is a third-year sports and media journalism major at the University of Florida.
@ellie_shreve
Previous Pat Dooley’s Back Nine (August 8th)
Next The Mike Peterson Foundation Helps Students in Alachua County 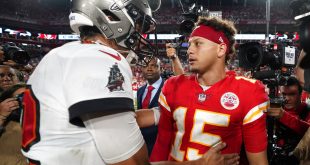