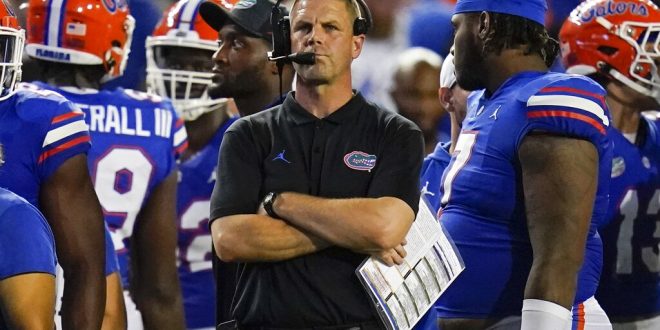 Florida head coach Billy Napier stands next to his players during a timeout in the final minutes of an NCAA college football game against Kentucky, Saturday, Sept. 10, 2022, in Gainesville, Fla. (AP Photo/John Raoux)

Napier looks ahead to USF matchup

Head Florida coach Billy Napier said he looks to learn from this loss as the team prepares to take on the University of South Florida on Saturday. After suffering a loss to the Kentucky Wildcats this past weekend, Gators football fell six places to No. 18 in the AP Poll.

Napier Picking Up the Pieces

The Gators led the Wildcats 16-13 going into halftime. They failed, however, to score a single point in the second half, resulting in a 26-16 loss.

Instead of dwelling on the disappointing result, Napier explained how he will take responsibility in order to improve going forward.

He emphasized how this loss is giving the team an opportunity to “hit the reset button” and “recenter.” While the team did not walk away from this weekend with the result it wanted, Napier said it is important to learn from its mistakes.

By taking accountability, the team can better understand what went wrong and how they can improve, he said. Napier himself said he is looking inward at his mistakes in order to better position his team going into its next game.

The Right To Win

Quarterback Anthony Richardson struggled against Kentucky, throwing for 143 yards, no touchdowns and two interceptions. While Coach acknowledged these issues, he said he did not place the full blame for the loss on him.

#Gators coach Billy Napier: 'This is just one page, one chapter in the book about Anthony Richardson. Still a young player.'

He said people are going to blame Richardson for the loss because he leads the team as the quarterback. While he sees improvements Richardson can make, he also said every player on the team can be better.

The Gators will take on the University of Florida on Saturday. Kickoff is set for 7:30 p.m.