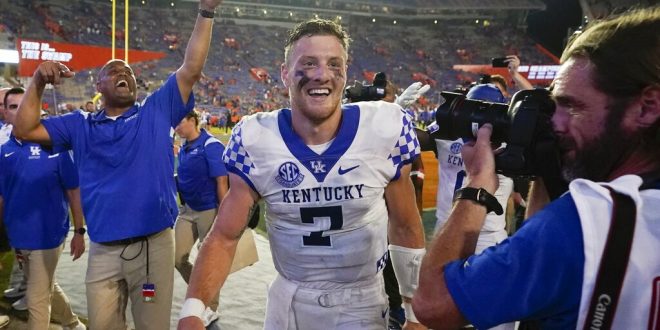 Week 2 in the SEC provided some high-level football with an inter-conference upset, clutch late performances by two teams and one player solidifying himself as arguably the conference’s best rusher.

Take a look at some of the top performances throughout the SEC in Week 2.

With question marks on the offense, Kentucky would need its defense to step up if it were to upset then-No.12 Florida, and it did. Florida had zero answers in the passing game as the Wildcats intercepted two passes, one that set up a Will Levis touchdown, and another that was returned 65 yards for a touchdown by Keidron Smith.

Additionally, Kentucky made two fourth-down stops to win the game late in the fourth quarter, both on pass breakups.

Overall, Kentucky’s defense shined in the win, marking the first time since 1976 and 1977 that Kentucky beat Florida twice in a row and making Mark Stoops the winningest head coach in school history.

In its conference opener of the 2022 season, now-No. 10 Arkansas downed South Carolina 44-30 behind a tremendous performance from Raheim Sanders.

On the day, Sanders rushed for 156 yards and two touchdowns on 24 carries. Additionally, both of his touchdowns came in the first half.

With his performance, Sanders’ 273 rushing yards leads the SEC through the first two weeks of the season.

In the other ranked versus ranked matchup in the weekend, No. 24 Tennessee travelled to unfamiliar territory to take on No. 17 Pitt. In a back-and-forth game, the Volunteers pulled out a major victory behind the heroics of veteran quarterback Hendon Hooker.

Overall, Hooker threw for 325 passing yards and two touchdowns, including the game-winner in overtime.

Hooker’s 27 completions is a career-high. Additionally, the SEC named him the Offensive Player of the Week for his performance.

After three quarters of sloppy play with undisciplined penalties, Alabama made clutch plays in the final 15 minutes to escape with a one-point win over unranked Texas.

Down two points with 35 seconds left in the game, Bryce Young made one of the greatest plays of his young career with a long run to put the Crimson Tide in field goal position.

In the fourth quarter, Alabama scored 10 points after being shut out the previous two. Additionally, it accounted for 188 total yards in the quarter after only having 161 yards through the first three quarters. Without that clutch performance, the Crimson Tide would not have escaped Austin with a win.

A quick look to Week 3

Heading into Week 3, there are a few big matchups for SEC teams. No. 1 Georgia travels to South Carolina in its first conference game of the season. Additionally, LSU hosts Mississippi State to open up conference play for both schools.

Finally, No. 24 Texas A&M, fresh off of a devastating loss to unranked Appalachian State, hosts No. 13 Miami in what could be the game of the week.

Cam is a fourth-year broadcast journalism sports and media major at the University of Florida. In addition to writing and recording radio trendings for WRUF, Cam covers North Florida HS football for The Prep Zone and Mainstreet Daily News and UF football and basketball for Inside the Gators.
Previous Napier looks ahead to USF matchup
Next Russell Wilson Plays Against Former Team