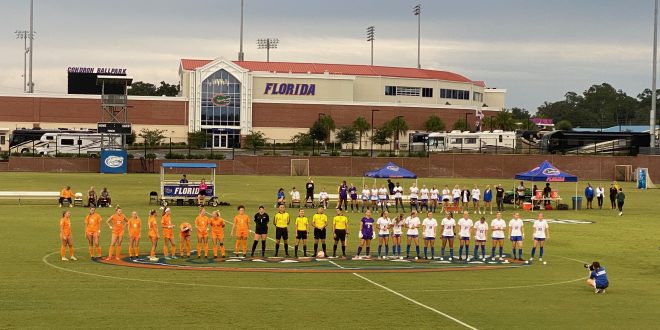 Florida Gators opened up SEC play on Friday night against the reigning SEC champions Tennessee Volunteers losing 2-1. Even with the dreary weather fans still packed the stadium to watch their Gators. The last time these teams met on the field was at the SEC Quarterfinals. The Volunteers won 5-2.

All Volunteers in the first

Right off the bat, Julianne Leskauskas created a good scoring opportunity off a Tennessee turnover. However, for much of the first half, Tennessee controlled possession. Tennessee’s onslaught of chances began with a penalty at 1:36 which led to Taylor Huff taking a shot. A pair of corner kicks resulted in a couple of more scoring chances for the Volunteers, but they were unable to finish.

The Gators were on their heels for much of the first looking for a fast break.

At 18:34, the Volunteers broke through as Jaida Thomas crossed the ball which was missed by a Gator defender and left in the middle of the box Mackenzie George to put in the back of the net, 1-0.

Quickly after the Gators responded with a pair of shots by Syd Kennedy and Delaney Tauzel to no avail. Tennessee’s goalkeeper Lindsey Romig kept the one-goal lead with some nice saves.

On the fast break, the referees awarded the Volunteers a penalty kick off a Josie Curtis foul. Claudia Dipasupil scored for the Volunteers as Gator keeper Alexa Goldberg made a valiant effort; however, it hit her gloves and went into the net at 30:34, 2-0.

In the last 10 minutes, a fire lit inside the Gators where they controlled the ball more and took more shots at the net.

Going into the half, Florida was served with a yellow card.

Late push by the Gators

Coming back after the half, Florida picked up where they left off showing signs of good control of the ball.

The Volunteers were able to capitalize on their possession of the ball and take two shots back to back at Goldberg. Goldberg deflected the first shot with her hands to then block the next immediately after with her feet.

For the majority of the half, there was a bit of back and forth of up and down the field with each team taking their chances at a goal.

Florida kicked it into high gear and laid on the pressure with about 25 minutes to go.

At 69:05, Maddy Pirrello scored a goal for the Gators, 2-1. This game was Pirrello’s first start of her Florida career. She is the 25th player in history to score a goal in the first start.

In the final 15 minutes, Florida took five shots at the goal while Tennessee tried its best to play keep away from the Gators and did just enough to secure the win.

Although the Gators lost, Pirrello believes that the team has not been playing as they should and being able to compete with SEC favorite, will give them much-needed confidence.

Head Coach Samantha Bohon is proud of the effort her team displayed despite the loss.

The Gators will travel to Oxford, Mississippi on Thursday, September 22 against Ole Miss.