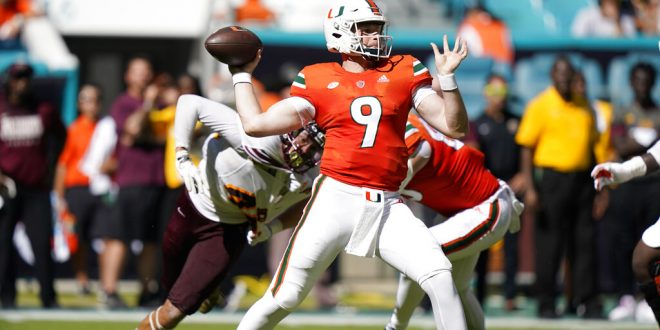 The ACC has a handful of quarterbacks that are in the discussion for being some of the best in the country. Not only have they had excellent performances, but they have established their teams in the AP Top 25. These quarterbacks will be in action for week 3 of the college football season

Tyler Van Dyke and the Miami Hurricanes are off to a great 2-0 start. They began their season with two dominant wins over Bethune-Cookman and Southern Mississippi. Van Dyke has thrown for 454 yards and 3 touchdowns over the course of both games. Arguably their toughest test of the season comes this week when they head to College Station to take on Texas A&M.

Texas A&m is coming off a humiliating upset to Appalachian State that dropped them out of the top 6. However, the Aggies brought in the best statistical recruiting class in the history of college football this past offseason. The majority of this class is on the defensive side of the ball, giving Texas A&M one of the best defensive front 7s in the country. Van Dyke is down one of his top targets, Xavier Restrepo, so he will need to utilize his other receivers to ensure efficient offense.

Coming into this season, NC State’s Devin Leary was regarded as one of the top veteran quarterbacks in the nation. All eyes were focused on the Wolfpack’s defense, but Leary has been the key. In their first two wins, Leary has thrown for 449 yards and 5 touchdowns.

NC State will host the undefeated Texas Tech Red Raiders this week. Texas Tech upset Houston in an overtime thriller last weekend. This will create a great matchup between two undefeated teams. Devin Leary will be tasked with having an efficient game. He can’t afford to turn the ball over and allow the high-scoring Red Raiders to have extra opportunities to score.

Right as the season started, Wake Forest starting quarterback Sam Hartman announced that he would be missing some time due to personal issues. He missed the Demon Deacons’ week one matchup against VMI but would return against Vanderbilt and put up an excellent performance. Hartman threw for 300 yards and 4 touchdowns in week 2. He was one of the best ACC quarterbacks last season and is due for another great year.

Hartman and the Demon Deacons face an undefeated Liberty team on Saturday. This will be a good test to see if Hartman is back to the dominant form that he portrayed last season. Wake Forest has a good chance to make it out of the ACC if Hartman plays to his potential.