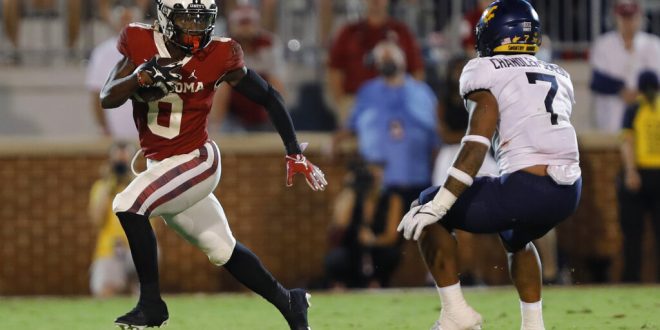 Week 3 of the college football season is in the books, and the Big 12 went 7-2. The conference’s four ranked teams handled business, outscoring their opponents by a combined score of 195-48. Here’s a look at some of the Big 12’s top performers that led the way Saturday.

Oklahoma’s star running back Eric Gray led the way for the Sooners en route to a dominating 49-14 win over Nebraska. Gray only had 11 carries, but made the most out of it totaling 113 yards on the ground and finding the endzone twice. His explosive day was highlighted by two touchdowns in under four minutes of game action, with the exclamation point being his 21-yard run early in the 3rd quarter. Oklahoma will hope to bolster their playoff chances as they head into the bulk of their conference schedule against Kansas State next week.

Oklahoma State and Spencer Sanders came into the week ranked #8 and played like a top-10 team as they cruised to a 63-7 victory against Arkansas-Pine Bluff. Sanders was extremely efficient, completing 13 of his 16 attempts for 242 yards over the course of the first two quarters. He averaged just over 15 yards per completion, but what’s even more impressive is the four touchdown passes before halftime, including a 42-yard bomb to Braydon Johnson. Sanders and the Cowboys will look to keep rolling when they travel to Baylor in two weeks.

About as good a half as you could hope for playing an FCS team. #OKstate leads 49-7
-Spencer Sanders done for the day with 242 pass yds and 4 TDs
-Gunnar Gundy first career TD pass to Tayln Shettron
-Braydon Johnson 86 rec yds 2TDs

Richard Reese had a slow start to the year, totaling just 15 carries for 81 yards over the first two contests. However, he exploded in Baylor’s 42-7 route of Texas State. Reese rumbled for 156 yards on the ground on 19 carries, including an impressive 52-yard score. That was just one of his touchdowns though, as he found pay dirt three times throughout the day to bring his season total to five. Baylor had a much-needed bounce back after their loss to BYU last week but will shift their focus to Iowa State next week.

Bijan Robinson extended his season scoring streak to 3 games but did not stop there on Saturday and leads the list of the Big 12’s top performers. When all was said and done, Robinson had three touchdowns to go along with over 200 total yards. He ended the day with 183 yards on the ground including an explosive 78-yard touchdown run. The Longhorns did look rough early, quickly falling into a 17-7 hole, but Robinson led the way back for Texas, resulting in a 41-20 win. The absence of quarterback Quinn Ewers could be tricky for Texas, with Oklahoma quickly approaching on their schedule. However, if Robinson continues to perform like he did this week, the Longhorns might be alright. 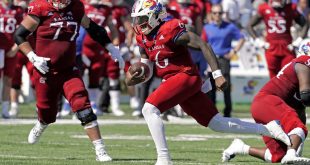