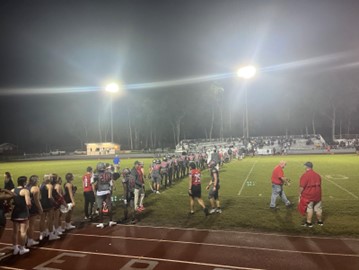 It’s been a tough start to the season for the Santa Fe Raiders, losing in each of their first three games. Things aren’t looking up, either, after a devastating 40-6 loss to the North Marion Colts on September 16.

At the start of the game, the school spirit was radiating as parents, teachers and students packed the home stands to cheer on the Raiders. From the very beginning, it was clear that the Colts defense would be tough to beat. Although adrenaline was high, North Marion was able to maneuver the Raiders’ defense for a touchdown to open the scoring with only 4:50 left on the clock in the first quarter. Santa Fe was unable to bounce back allowing another touchdown three minutes later.

The barrage continued into the second quarter when the Colts scored yet again with about eight minutes left in the half. Despite missing their extra point attempt, the Colts were able to extend their lead to 27 points before halftime. Raiders fans were finally able to celebrate after a big reception by senior wide receiver KJ Johnson. Starting to feel pressure to get on the board before the end of the first half, Blake McCormick was then able to score the Raiders’ first touchdown with only 3:48 left on the clock.

Raiders finally on the board with a touchdown. No extra point, but they cut the Colts’ lead to 21. Santa Fe 6 North Marion 27 @ESPNGainesville @SFHS_Raiders pic.twitter.com/VxBrP8S95h 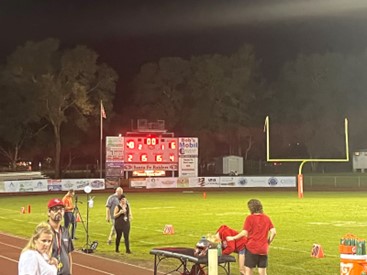 Unfortunately, the Raiders were unable to secure the extra point. It seems that halftime may have taken this team’s momentum away because at the start of the third quarter, the Colts were running circles around the defense; although they were able to keep North Marion out of the end zone until there was only 2:36 left in the third quarter.

The Colts entered the fourth quarter dominating the Raiders by 27 points. KJ Johnson had another big reception from quarterback James Smith with 4:23 left in the game, but the Raiders were not able to capitalize on the opportunity. In a final glimmer of hope, it seemed the Raiders would score another touchdown with 57 seconds left on the clock, but Smith’s pass was intercepted.

The Raiders walked away with another loss, as the final score stood at 40 for North Marion and 6 for the Santa Fe Raiders. Hopefully, the tides will turn for Santa Fe High School this Friday 9/23 as they take on Gainesville High School at home.