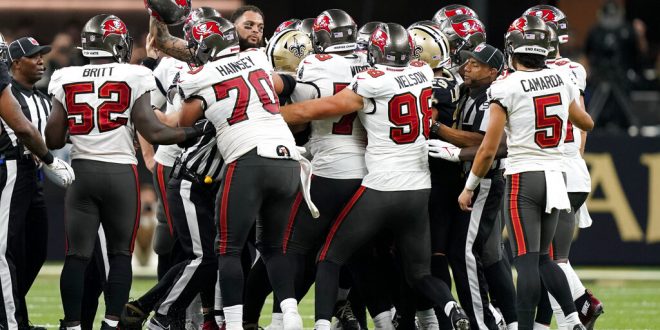 Officials break a brawl between the New Orleans Saints and the Tampa Bay Buccaneers during the second half of an NFL football game in New Orleans, Sunday, Sept. 18, 2022. (AP Photo/Gerald Herbert)

Buccaneers Take Down Saints 20-10 on Big Night for Brady

Emotions were high on Sunday in the Caesars Superdome as the Tampa Bay Buccaneers took down the New Orleans Saints 20-10. Both teams entered the week two contest 1-0. While the matchup was not a crucial win for either team, it certainly was for Tom Brady.

Brady went 0-4 in regular-season games against the Saints during the past two seasons. He has now gained his first win over the saints as a Buc on a night where Tampa Bay ended the narrative that they couldn’t defeat New Orleans.

Sunday’s contest between the NFC South rivals was nothing short of intense. Brady slammed a tablet to the ground with a stone-cold glare and dramatic toss of his arm.

The Microsoft tablet might want to sit out the next Tom Brady plays the Saints. pic.twitter.com/l062fvG9aZ

The Saints certainly have a way of getting in Brady’s head. A questionable pass-interference no-call early in the fourth combined with a tied 3-3 game set the stage for Brady’s frustration. Brady began yelling at Marshon Lattimore. Bucs running back Leonard Fournette was welcomed to the brawl with a shove by Lattimore to which Mike Evans was quick to answer. Evans brought the Saints’ star cornerback to the ground in a similar fashion to his 2017 fight with Lattimore.

MIKE EVANS AND MARSHON LATTIMORE AT THE NEXT ROUGH N ROWDY pic.twitter.com/og8I1NYGz7

Evans and Lattimore were both ejected following the fight. Evans, who was also ejected in 2017, may have done more good than harm for his team as Tampa Bay quickly turned things around following the brawl.

A Game Full of Surprises

Sunday’s matchup was truly full of surprises. With wide receivers Chris Godwin and Julio Jones out due to injuries, and an ejected Evans, Breshad Perriman stepped up to the plate. Perriman shocked fans as he caught a 28-yard pass from Brady in the back right corner of the end zone. The go-ahead touchdown turned things around for Tampa Bay, bringing the Bucs out in front 10-3. Perriman completed the contest with three catches, 45 yards, and a major touchdown for Tampa Bay. Perriman’s performance showcases the depth the Bucs possess in the receiving room.

Another standout from Sunday’s game was Jamel Dean. Dean received much praise during the preseason before winning the starting outside cornerback position and benching Sean Murphy-Bunting in doing so. Dean balled out against the Saints with two interceptions against his former quarterback.

Following the first two picks by Dean, Bucs safety Mike Edwards returned an interception for a 68-yard touchdown to extend Tampa Bay’s advantage to 20-3. The Bucs’ defense put an end to any chance the Saints had at making a comeback. Tampa Bay intercepted Saints quarterback Jameis Winston three times in the final 12 minutes of the game. Tampa’s defense recorded two fumble recoveries, three interceptions, six sacks, and one touchdown.

🗣: @TomBrady on the #Bucs defense pic.twitter.com/vylQy4BIGG

A Look at the Buccaneers Offense

The Bucs’ defense has carried a lacking offense through the first two games of the season. The Bucs did not get on the board until late in the third when Ryan Succop completed a 47-yard field goal, tying the game 3-3.

Brady completed 18 of 34 for 190 yards and a single touchdown, while Winston finished 24 of 40 passes and one touchdown to Michael Thomas with 3:02 remaining in the fourth.

The Bucs O-line entered week two down their starting center, starting left guard and starting left tackle. Then during Sunday’s game, Bucs backup left tackle Josh Wells left the first half with a calf injury. The O-line may have fought hard against the Saints, but they are definitely a weakness for Tampa Bay.

Up Next For Tampa

The Bucs will play in Tampa for the first time this season in a matchup against the Green Bay Packers on Sept. 25. Brady will take on Aaron Rodgers to open up Raymond James Stadium.

Ellie is a third-year sports and media journalism major at the University of Florida.
@ellie_shreve
Previous Dolphins Rally To Defeat Ravens Behind Multiple Historic Performances
Next Three B1G Teams in Top 25 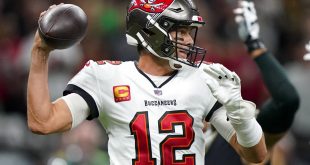