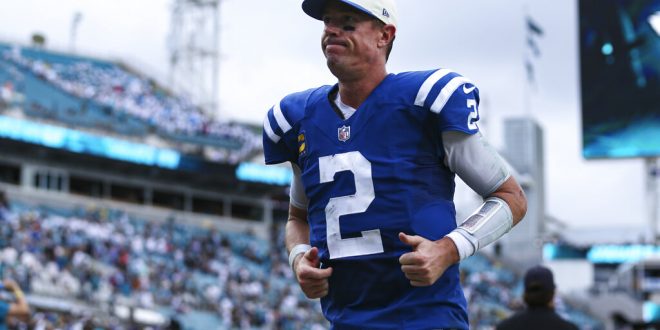 Colts defense took a major hit Sunday with a 24-0 loss to the Jaguars.

It’s been a long time

The Colts headed into their Week 2 matchup against the Jacksonville Jaguars on the wrong end of a streak.

It had been almost eight years since their last win in Duval and Sunday night seemed a revenge game for a Colts team that saw its playoff dreams erased in January after a loss to the Jaguars in the final game of last season.

After nine months, four quarters and a shutout, the Jaguars extended their home streak against the Colts to eight games.

The @Jaguars defense was feeling it today as they blanked the Colts, 24-0. pic.twitter.com/DxB0ylWTY0

The Jags’ defense set the tone early in the opening drive against a Matt Ryan yet to find his footing in Indianapolis.

On the seventh play of the game, the Colts lined up in the shotgun. Drop step, pressure and a lob previewed what would be a rough night for the former MVP.

Then, Rayshawn Jenkins interception signified the beginning of the end.

Fifteen plays later and a hero emerged in Christian Kirk as he redeemed Jenkins’ defensive effort with a touchdown catch to put the Jags up a score.

Defensive stops for a Jags line that seemed to have the keys to the Colts’ backfield.

Two drives crashed by sacks from Josh Allen, followed by a gash exploited by a 37-yard James Robinson run put Jacksonville up 14-0.

There was no let-up in the second half for the Jags’ offense. Kirk and Trevor Lawrence dialed up for 78 yards and two touchdowns. Lawrence finished the game completing 25 of 30 passes for 235 yards and two Kirk touchdowns.

Devin Lloyd would pick up his second interception of the season after pressure forced Ryan into a bad throw, with Andre Cisco picking off another to seal the shutout for the Jags.

The win against the Colts put a crown on Florida’s head for week two. The Dolphins, Buccaneers and Jaguars won their matchups against the Ravens, Saints and Colts. Out of the three, though, the win could mean a little more to a Jacksonville team that has struggled in recent history and put the Jaguars in first place in the AFC South.

For now, it’s all eyes on a week three matchup with the Chargers.

Junior studying Journalism - Sports & Media at the University of Florida
@@delossantosr
Previous Three B1G Teams in Top 25
Next Napier looks ahead to SEC matchup against No. 11 Tennessee