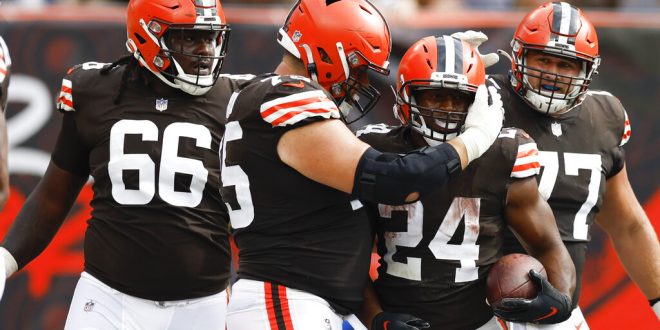 The Cleveland Browns celebrate after running back Nick Chubb (24) scored a touchdown against the New York Jets during the second half of an NFL football game, Sunday, Sept. 18, 2022, in Cleveland. (AP Photo/Ron Schwane)

The Steelers and Browns prepare for heated a matchup in Cleveland in a mid-week showdown as they face off for the first time this year.

Both of these teams come into this match-up tonight with a record of 1-1. Neither offense has exactly lit up the competition. The Steelers in particular are experiencing some offensive woe. New addition quarterback Mitch Trubisky has thrown for only 362 yards through two games, with just two touchdowns. Star second-year running back Najee Harris is struggling to get anything going as well. He is yet to break the 100-yard mark for the season with 25 carries for 72 yards. On the other hand, the Steeler defense has kept the team afloat. Four interceptions off Joe Burrow and the Bengals lead to a week one win. Last week, they gave up only 17 points in a loss to the Patriots.

The Browns are without quarterback Deshaun Watson, who is serving an eleven-game suspension handed down by the league. In his absence, veteran Jacoby Brissett has stepped into the starting role. The offense is led by All-Pro running back Nick Chubb. He shares the league lead for rushing TDs and is second in yards with 228.

Nick's off and running to a hot start this season ♨️

2nd in the league in rush yds, tied for 1st in TDs pic.twitter.com/rJF0FP3lh7

There are a couple of statistics that jump off the page when studying the matchup. The Browns have to take care of the football. The Steelers are tied for the most takeaways in the league at six. Clearly, that number has kept them in the games they have played so far. Conversely, the Steelers have to find a way to wake up their dormant offense. Some are calling for the first regular season appearance of Kenny Pickett. The quarterback was the Steeler’s first-round selection in the draft this past Spring. Although there has not been any word of it from the Steelers team, if the offense continues to sputter we may see a Pickett debut.