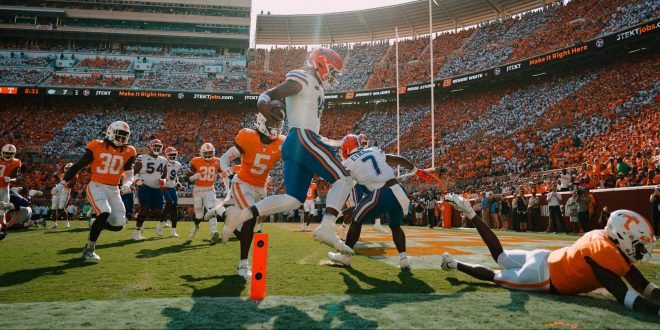 On Saturday, the Florida Gator football team took to the field at Neyland Stadium to face off with SEC rival Tennessee. Florida fell to the Volunteers 38-33 in its first game on the road this season. The Vols improve to 4-0 while the Gators are now 2-2 on the season.

With just 17 seconds remaining in the game, Florida linebacker Diwun Black made a huge one-handed on-side kick recovery to give the Gators life in the back and forth contest.

HE TOOK THE ONSIDE KICK OUT OF MID-AIR! FLORIDA HAS THE BALL. pic.twitter.com/2ohMj2UKoL

Gator quarterback Anthony Richardson then completed a 14-yard pass to Florida wide receiver Justin Shorter, bringing the Gators to Tennessee’s 34-yard line. Gator fans clung to the hope of a hail Mary as the clock ticked down.

Following an incomplete pass by Richardson, Tennessee’s Kamal Hadden made an interception to end the game.

Fans of the Orange and White erupted in the stands, celebrating Tennessee’s first victory over Florida since 2016. The Vols are now 2-16 against the Gators in the last 18 years.

While Tennessee took home the victory, Florida’s offense put up a strong performance, showcasing clear improvement since their last contest against South Florida.

Gator head coach Billy Napier talked about the performance of Gator quarterback Anthony Richardson, who bounced back from poor performances in his previous two outings.

While the Gators have made some improvement on the offensive side of the ball, there is still a lot of work that needs to be done. “We didn’t do enough to win, but I think we grew up a little bit,” Napier said.

Florida wide receiver Ricky Pearsall spoke on how the progress made by the offense was not enough and could be better.

Florida’s Fight in the First Half

The Gators missed their first field goal attempt of the game after recovering the ball on a Tennessee fumble with a big strip play by Florida linebacker Ventrell Miller. The Vols made it on the board first with a 32-yard field goal by Tennessee kicker Chase McGrath, marking the only score of the first quarter.

Florida opened up the second quarter with the team’s first passing touchdown of the season. Richardson connected with Florida tight end Keon Zipperer on a 44-yard pass, bringing the Gators out in front 7-3.

The Vols quickly responded with a touchdown of their own, following a huge 70-yard play from Tennessee quarterback Hendon Hooker to Tennessee wideout Bru McCoy. Tennessee took the lead 10-7.

However, the Gators continued to fight. A 38-yard completion to Pearsall, was followed by a key first down conversion to Florida wideout Trent Whittemore. Richardson’s passing game combined with Florida running back Trevor Etienne’s ability to run the ball, resulted in a Richardson touchdown. Florida reclaimed the lead 14-10.

Then as Tennessee’s protection broke down, Florida linebacker Amari Burney executed a strip sack on Hooker, allowing Miller to recover the fumble. Soon after, Florida punter Jeremy Crawshaw completed a 49-yard punt, pinning the Vols deep at their own 1-yard line.  But the Vols finished off the first half with a 99- yard drive that ended with a touchdown by McCoy. Tennessee took the lead 17-14.

In the third quarter, a costly offside penalty on Florida’s defense allowed the Vols to convert on the next play on third and two, bringing Tennessee into the red zone. Hooker reached Tennessee running back Jabari Small for a Tennessee touchdown and the Vols extended their advantage 24-14.

The Gators kept their heads in the game as Napier’s decision to go for it on fourth down paid off. Florida got a touchdown as Richardson scored on a one yard QB sneak. The Vols remained in the lead 24-21 with 5:47 remaining in the third.

Tennessee’s offense continued to dominate. After a lengthy ruling on the field, Small got the touchdown on a short rush for the Vols, who now led 31-21. Soon after, Richardson fumbled the ball which resulted in yet another Vols touchdown by Tennessee running back Jaylen Wright.

While the Vols remained on top 38-21, the Gators did not give up. Napier commended the team for fighting through adversity and continuing to execute plays until the very last second.

“Showed some character today, in my opinion. A lot of opportunities out there where we could have folded, but we kept swinging,” Napier added.

While the Gators trailed they did not give up. Florida running back Montrell Johnson Jr. scored a touchdown after a 39-yard pass from Richardson to Shorter. With 17 seconds remaining, Pearsall made a touchdown to score the final points of the night for Florida.

Ricky Pearsall with his first touchdown catch as a Gator.

Cut the deficits to 38-33 with 17 seconds left. pic.twitter.com/3DnvnZfHA3

The Gators will return to The Swamp to host the Eastern Washington Eagles on October 1, while the Vols will travel to LSU to take on the Tigers on October 8.

Ellie is a third-year sports and media journalism major at the University of Florida.
@ellie_shreve
Previous Dooley’s Grades (Florida vs Tennessee)
Next Florida Volleyball Falls to South Carolina in Five-Set Battle