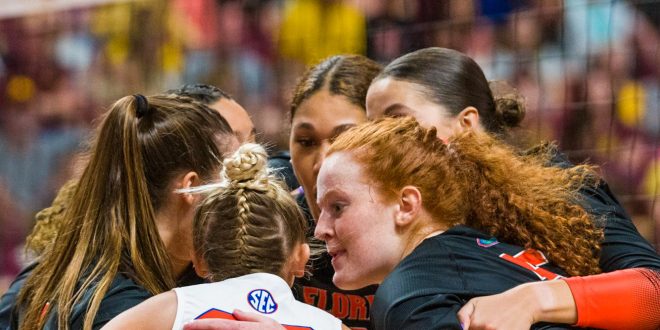 The volleyball team huddles around each other in the team's loss against Minnesota on September 4. Photo from @GatorsVB on Twitter.

The Florida volleyball team fell to South Carolina in five sets in Sunday afternoon’s SEC volleyball matchup. The Gators defeated the Gamecocks on Saturday in the first of a two-game series.

Despite losing on Sunday, the Gators still lead the all-time series against the Gamecocks with 62 wins and only ten losses. Furthermore, under head coach Mary Wise, Florida has boasted a 54-4 record against South Carolina. Sunday marked the Gators’ first loss to the Gamecocks since Nov. 2020.

Neither the Gamecocks nor the Gators could break away until midway through the first set. Holding onto a 14-13 advantage, Florida capitalized on South Carolina’s errors to extend the lead.

A Gamecock service error followed by a double block from Gabbi Essix and Markova, as well as an Essix kill forced South Carolina head coach Tom Mendoza to call a timeout down 17-13.

Three kills by Sofia Victoria helped the Gators pull out a 25-20 set one victory.

South Carolina jumped to a quick 7-3 lead over the Gators at the start of set two. Florida rallied to tie up the game, but it wouldn’t be enough to hold off the Gamecocks.

SET TWO: Cutch puts it away for the clinching point! The Gamecocks and Gators are all square after two sets.

Kills at the end of the set from McKenzie Moorman, Lauren McCutcheon and Riley Whitesides allowed South Carolina to walk away with a 25-21 win in set two.

The Gators wasted no time capitalizing on Gamecock errors at the start of the third set. Three of Florida’s first four unanswered points were thanks to South Carolina attacking errors.

Gators start off set 3 with 4 points in a row.

Errors continued to plague the Gamecocks throughout set three which resulted in a 25-17 Florida win.

The Gamecocks responded in set four with a 25-22 win. After a back-and-forth start to the set, the momentum shifted to the Gators thanks to a failed challenge by the South Carolina coaching staff.

The score remained close throughout set four until kills from Whitesides and Moorman opened up the score for the Gamecocks. South Carolina took advantage of Florida’s attacking and service errors to secure the set four win.

The Gators had no answer for the Gamecocks in set five. A seven-point run allowed South Carolina to jump to a 9-4 lead. Whitesides tallied five kills in the final moments of set five to allow the Gamecocks to secure the match victory.

The Gators return to the court to face off against the Tennessee Volunteers Oct. 5 at 7 p.m. in Knoxville, TN.