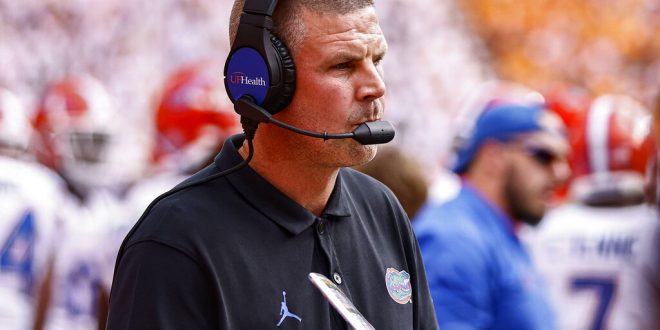 Florida head coach Billy Napier said the team has a lot to learn from its loss against Tennessee as it prepares to take on Eastern Washington Saturday.

Following this weekend’s 38-33 loss against SEC rival Tennessee, the Gators have dropped out of the AP Poll.

Entering their matchup against Eastern Washington, Napier said the Gators will aim to be more consistent.

Napier said he is focused on the big picture. While he said there is no doubt the team can play better, there is a long way to go to be the football team it wants to be.

To prepare for Saturday’s game, Napier said the team will focus on repetitions in order to combat the inconsistency.

The team is looking forward to being back home in front of a crowd of Florida fans. However, the weather may go against the Gators for Week 5. As Hurricane Ian moves closer to Florida, Napier commented on the rain and wind that may impact the game.

Taking Notes From the Tennessee Loss

Napier said every player on the team can make improvements following the narrow loss against Tennessee. To put it simple, the team made too many mistakes in order to win the game, he said. While the loss can be disheartening, Napier said he was proud of the team’s response.

Napier said he felt the team embraced the big stage. While the outcome is not what they wanted, there are a few notes to takeaway from the game.

Lot to learn from that experience, Napier said of the loss at Tennessee. Too many mistakes Florida couldn't overcome.
"There was no question we were ready to play, we were ready to compete." Embraced the stage

The Florida head coach saw a flip switch in Anthony Richardson. Napier said he was entirely focused on competing and leading his team to a win. Again, while the result is not what the team wanted, Napier saw improvements in Richardson going forward.

On defense, Napier emphasized the importance of communication. At the end of the day, the defensive line needs to step up and execute their job in critical moments during the game, Napier said. However, during these moments of failure, Napier said the players took ownership of their individual errors and will learn from them as the season progresses.

The Gators will take on Eastern Washington on Saturday. Kickoff is set for noon.