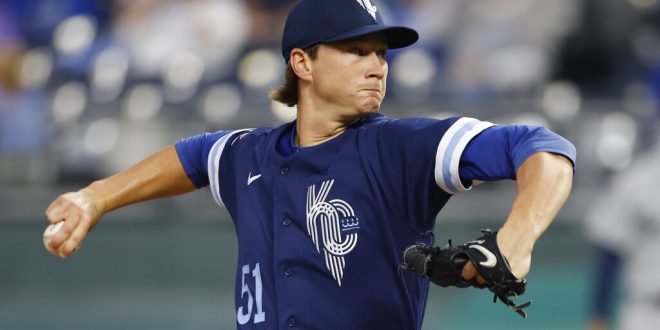 Former Gator Brady Singer is discretely shining through his third MLB Season as the starting pitcher for the Kansas City Royals. He is recording the best game record 10-4 in his career so far.

Singer was the 18th overall pick in the 2018 MLB draft after playing for the Florida Gators for three seasons. In 2017, he led Florida to a national title. In 2018, he was named the SEC pitcher of the year and won the Dick Howser Trophy.

Singer played in the Minor League for the first two years in his professional career.  In 2020, Singer was officially activated onto the Royals roster and made his MLB debut on July 25, 2020.

Singer has been continuing to improve throughout the 2022 season. He started 23 games so far and went 10-4 with 2.99 ERA, 144 strikeouts and 34 walks over 147.2 innings pitched. Singer is displaying tremendous efficiency with lower ERA, walks and more strikeouts while playing fewer games.

Singer also broke his personal record of the most strikeouts in a game this season against the Tampa Bay Rays on July 23. He recorded 12 total strikeouts which contributed to the Royals’ 6-3 win.

Overall, the Royals have been satisfied with Singer’s performance throughout the season. In the post-game press conference on Sept. 23, Mike Matheny, the Royal’s manager, said he was impressed with Singer’s confidence and that he only “keeps getting better.”

What’s Next for Singer & the Royals?

The Royals have been officially eliminated from the playoff contention as of Sept. 16 after their loss to the Minnesota Twins. However, the Royals can remain hopeful for the next season as Singer only continues to improve. With nine games remaining for this season, the Royals will play the Detroit Tigers Tuesday at 6:40p.m.