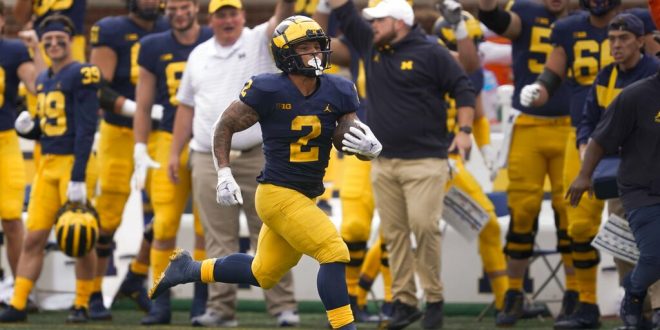 Michigan running back Blake Corum (2) runs for a 42-yard touchdown against Maryland in the second half of an NCAA college football game in Ann Arbor, Mich., Saturday, Sept. 24, 2022. (AP Photo/Paul Sancya)

Through the first month of the college football season, Georgia, Alabama and Ohio State have been the top three teams in the country. With four teams making the college football playoff, dozens of teams have a chance to make a run for the College Football Championship.

Michigan is ranked No. 4 but still has a pair of games against top teams, including the Buckeyes on Nov. 26.

No. 5, 4-0 Clemson is also a contender. It was tested in its last game against Wake Forest but survived with an overtime win.

USC is ranked No. 6 and is also 4-0 but still has a matchup against Utah, while a pair of SEC Teams round out the top eight in Kentucky and Tennessee.

Currently, 21 teams are still unbeaten this year. Following its win on Saturday against Boston College, Florida State jumped into the rankings for the first time this year. It is ranked No. 23.

otball Poll with its 4-0 record.

There are currently 10 teams ranked in the Top-25 with one loss. The Florida Gators are the highest ranked two-loss team at No. 28. Florida was knocked just out of the ranking after a 38-33 loss to Tennessee Saturday. It was one of three teams that fell out of the Top-25, along with Texas and Miami. The Gators are set to play Eastern Washington on Saturday, Oct. 1, at 12 p.m.