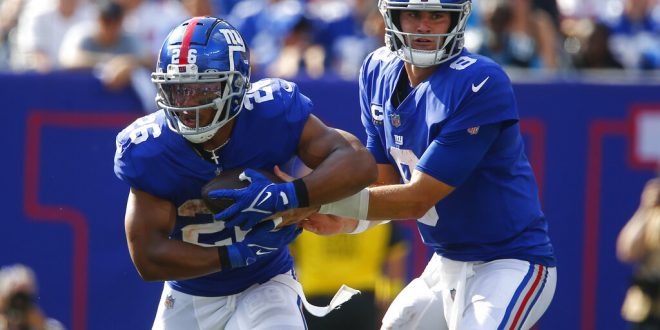 Week 2  in the NFL comes to a close Monday at MetLife Stadium. The 2-0 New York Giants will host their division rivals, the 1-1 Dallas Cowboys. Second in the NFC East, the Giants are looking to extend their record to 3-0.

Focusing on the Game Ahead

The Giants took down the Carolina Panthers 19-16 last week, but quickly turned the page to focus on their next opponent. Head Coach Brian Daboll emphasized the importance of his team being prepared for every matchup, no matter how many wins they rack up.

Daboll recognized the strength of the Dallas defense. He noted it held top quarterbacks Tom Brady and Joe Burrow to under 20 points and 200 passing yards a game. Meanwhile, New York was limited to 162 passing yards and 265 total yards in its matchup against the Panthers.

The Giants defense looked sharp last week with two fumble recoveries, with one on the opening kickoff.

After starting quarterback Dak Prescott fractured his thumb in Week 1, the Cowboys are marching into battle behind former Giant, backup quarterback Cooper Rush. Head Coach Mike McCarthy said he has all the faith in his No. 2, shutting down any rumors of a quarterback controversy.

In last week’s victory over Cincinnati, Rush threw for 230 yards and one touchdown.

Shutting Out the Giants Offense

Heading into Monday’s matchup, coach McCarthy said his defense has to keep an eye out for star Giants running back Saquon Barkley. A former AP Offensive Rookie of the Year, Barkley picked up 72 rushing yards and 16 receiving yards last week.

Kickoff for this NFC East matchup will take place at 8:15 p.m., with coverage beginning on WRUF at 8 p.m.