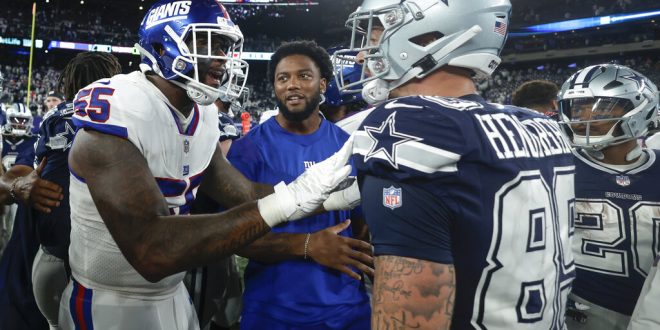 Cooper Rush is still undefeated in 2022. The Dallas Cowboys broke the New York Giants’ winning streak Monday night, with a 23-16 win at Metlife. Both teams now look ahead to Sunday.

The quarterback was steady on Monday, going 21 of 31 for 215 yards and a touchdown. His lone touchdown pass was the game’s deciding score, as CeeDee Lamb hauled it in with one hand to erase the zero in the Giants‘ loss column. The Cowboys offense delivered on the ground like the Pony Express.

Victory (and defeat) in a Cloud of Dust

Tony Pollard and Ezekiel Elliott were an impressive tandem for Dallas Monday night. Pollard rushed for 105 yards on 13 carries, while Elliott added 73 yards on 15 attempts. In a game whose halftime score was 6-3, the running backs allowed the team to grind out a close victory against a heated rival.

The Giants were more than respectable on the ground. Saquon Barkley and Daniel Jones combined for 160 yards, while Barkley’s touchdown was the Giants’ only score that did not come through the uprights.

Parsons Hands the Pen Over

Micah Parsons did not have a quiet game, but his impact did not show on the stat sheet. After tallying four sacks over the first two weeks of the season, the imposing defensive force went without one in East Rutherford. However, Parsons passed the pen to veteran defensive end Demarcus Lawrence, and Lawrence wrote much of the team’s story.

The former Boise State man finished with three of the team’s five sacks as the Cowboys’ defense wreaked havoc. Dan Quinn’s unit also took the ball away once on a Daniel Jones interception.

Forty-year-old Jason Peters made his Dallas Cowboys debut on Monday. After playing exceptionally for the Eagles from 2009-2020, the stalwart left tackle spent a season with the Bears. He made a noticeable impact at left guard for the Cowboys, coming up with key blocks to allow the team’s rushing attack to thrive.

Peters was on the practice squad before being signed to the active roster before the game.

The Cowboys will face off against the division rival Commanders Sunday. The Giants will host the Bears.