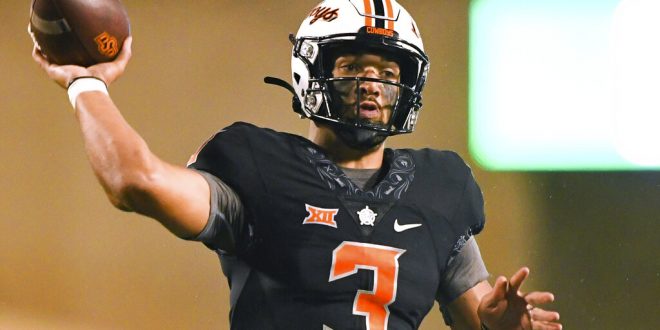 The 2021 Big 12 Championship game between Oklahoma State and Baylor featured a last-second defensive stop that ended Oklahoma State’s College Football Playoff hopes. This year, both teams are hanging on to the hopes of returning to that title game and finding themselves in the playoff.

It was almost certain that with a win in the championship game last year, Oklahoma State would slip into the College Football Playoff. However, Baylor held on despite Oklahoma State being set up with a first and goal from the Baylor 2-yard line inside two minutes.

Undoubtedly, the Cowboys are going to head into Waco with a lot of energy and a sense of revenge.

Spencer Sanders has been one of the most impressive quarterbacks in the nation to start the year, throwing for 10 touchdowns with just one interception. He will be well rested following the bye week not to mention the extra time to prepare and study the Baylor defense.

Sanders has struggled against Baylor in recent matchups, throwing for seven interceptions and just one touchdown over two games last year. He will hope to change that narrative Saturday.

Sanders has thrown multiple INTs in all 3 games against Baylor, compared to in just 2 of his other 22 games.

Bears Holding On to Playoff Hopes

Baylor still hangs on to some College Football Playoff hopes.

That could all come to an end with a loss at home against Oklahoma State on Saturday.

Oklahoma State may really need that extra preparation and rest from the bye week in order to get past the impressive Baylor defense.

The Bears have only given up 16.6 points per game, and have allowed just under 80 yards per game on the ground. They should be able to keep the Cowboys’ running game in check, but they may have a harder time dealing with Sanders.

Offensively, Blake Shapen has done a great job in the first part of the 2022 campaign. He is also starting to gain more confidence at the perfect time, coming off of a near flawless three-touchdown performance last week.

Baylor will need both sides of the ball executing well in order to get their first-ranked win of the year.

Baylor really cannot lose this game if they want any hope of making the CFP. While their two losses would be to ranked teams, they don’t have enough left on their schedule to build quite an impressive enough resume, nor will they necessarily make the Big 12 Championship.

With six teams still without a conference loss, and multiple undefeated teams overall, a second loss this early could be detrimental for Baylor’s Big 12 title defense.

Meanwhile, Oklahoma State still has a strong chance at returning to the Big 12 Championship and a shot at the CFP.

The upcoming stretch for the Cowboys is not easy, as they face three teams in a row that have yet to lose a conference game.

With seasons on the line, there is no doubt that energy will be high heading into Saturday, with both teams fighting to keep their hopes alive.

Matt is a third-year journalism major specializing in sports media and is also completing a sports management certificate. He also participates in sports broadcasting.
@MattQuartararo
Previous Reflecting on the Legacy of Roger Maris, The Original “Home Run King”
Next Texas A&M Takes on Mississippi State