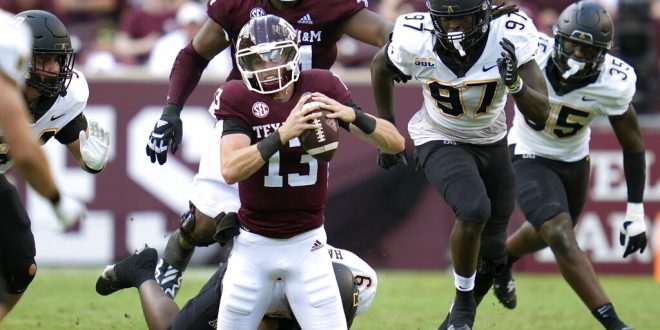 The Aggies are traveling to Starkville to take on the Bulldogs.

A&M had been struggling to move the ball in weeks two and three as they were held under 300 yards in both games.

Its defense is what kept Arkansas in this game as they gave up 415 yards of offense to the Razorbacks. The Aggies running back Devon Achane ran for 159 yards on only 19 carries, including a long 65-yard run.

One of the most bizarre football scores ever happened in this game. Arkansas fumbles at the three-yard line, it was recovered by Tyreek Chappell and taken to the 20-yard line.

After he was surrounded, he handed it off two his teammate Demani Richardson where he took it back for the touchdown.

The Bulldogs started the season rocking on the offensive side, but stalled in week three against LSU, then they picked it back up in week four.

Texas A&M will be the toughest competition thus far for Mississippi State and but they have a lot of things going for them.

The Aggies are giving up a ton of offensive yards this year. If the Bulldogs can keep up their offensive efficiency, they could very well walk away with a win.

Will Rogers has been electric for Mississippi as he has averaged 346 passing yards per game in the first four games and has three- four-touchdown games.

It has been an even battle in this series as they have only met a total of 15 times. Hail State has the 8-7 lead.

Last year, Mississippi State racked up 438 yards of total offense and came away with a 26-22 victory.

The Bulldogs got a late safety that put the game out of reach for A&M.