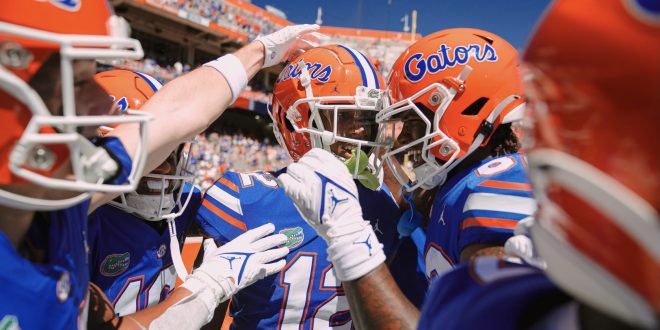 The Florida Gators football team (3-2. 0-2 SEC) returned to The Swamp on Sunday to take on the Eagles of Eastern Washington (1-2, 0-1 Big Sky). A rare Sunday contest, the result of a 24-hour pushback for Hurricane Ian, ended with Florida dominating in a 52-17 victory over the Eagles. The Gators collected their 750th game win in program history.

On Florida’s opening offensive play, Gators quarterback Anthony Richardson connected with wide receiver Justin Shorter for a 75-yard touchdown pass that brought the Gators out in front, 7-3, with 7:51 remaining in the first quarter. The 75-yard TD pass ties Richardson’s career high, set on Sept. 11, 2021, at USF, and records a new career-long reception for Shorter. The touchdown marked the first of many on what would be an electric day for the Gator offense.

Additionally, Florida wide receiver Ricky Pearsall gained a 76-yard touchdown run on an end-around, putting Florida ahead, 28-3, in the second quarter. Pearsall’s TD run is the longest rush by an FBS WR this season, also tying for the third-longest run by a UF wide receiver in the last 25 years. The rush also signified the longest of Pearsall’s career, as well as being his third-career rushing TD and a first touchdown as a Gator.

Richardson put forth a strong performance against the Eagles, completing 8-of-10 passes and finishing with 240 yards passing and two touchdowns. After throwing for 453 yards and 2 TDs in last week’s contest against Tennessee, Richardson has now passed for 200-plus yards in consecutive games.

After Richardson connected with Shorter for a TD on his first passing attempt of the game, the Gainesville native also ran for a 45-yard gain on a scramble that contributed to Florida running back Montrell Johnson Jr. scoring Florida’s second touchdown of the game.

During the second quarter, Richardson walked off the field after tweaking his ankle. However, as soon as Richardson returned to the game he threw a 21-yard TD pass to wide receiver Xzavier Henderson.

Napier had the following to say of Richardson’s performance against the Eagles.

Kitna In The Spotlight

In Richardson’s absence, Florida quarterback Jalen Kitna stepped in to make his collegiate debut. Kitna completed 8-of-12 passes for 152 yards and one touchdown.

In the third quarter, Kitna reached Florida freshman wide receiver Caleb Douglas for a 62-yard TD pass that brought Florida’s lead over the Eagles to 45-3. The TD pass was Douglas’ career-first reception and touchdown.

Kitna spoke on his development coming into the backup QB role.

With the Gators up 35-3 at the half, the remainder of the game provided Florida’s second and third-team players with many opportunities. Florida played 81 of their 112 dressed players, leading to valuable experience for many fresh faces.

Florida running back Lorenzo Lingard ran 11-yards for a TD, marking his first as a Gator and his third career rushing TD. Meanwhile, in the third quarter, Florida wide receiver Daejon Reynolds completed a 54-yard catch. Reynolds also led Florida in receiving, setting a career-high 74 yards receiving along with a receiving long of 54 yards. Douglas also made a 62-yard TD catch, while Florida wide receiver Kahleil Jackson caught his first-career pass for 20 yards.

Napier spoke on the opportunities that were provided to the younger talent on Florida’s roster, including Kitna.

A Look At Florida’s Defense

The Gators needed time to figure things out on the defensive side of the ball, as they allowed the Eagles to gain 103 yards within two long drives in the first quarter. The Gators also ended the game giving up 411 yards to Eastern Washington’s offense. “Our defense early kind of bent, but didn’t break,” Napier said.

However, things got better for Florida’s defense as they forced a pair of fourth-down stops in the first half as well as one takeaway when Florida defensive lineman Chris McClellan recovered a fumble by safety Miguel Mitchell. The Gator defense held Eastern Washington to 8-18 on third-down conversions with 1 of 4 on fourth-down tries.

The Gators will return to SEC play next Saturday, with another noon game in The Swamp against Missouri. The Missouri Tigers presented a challenge for No. 1-ranked Georgia, before falling to the Bulldogs 26-22.

Florida defensive end Justus Boone spoke on the team’s focus heading into their matchup with Missouri.

Ellie is a third-year sports and media journalism major at the University of Florida.
@ellie_shreve
Previous Kentucky travels to Ole Miss in ranked matchup
Next Dooley’s Grades (Florida vs EWU)