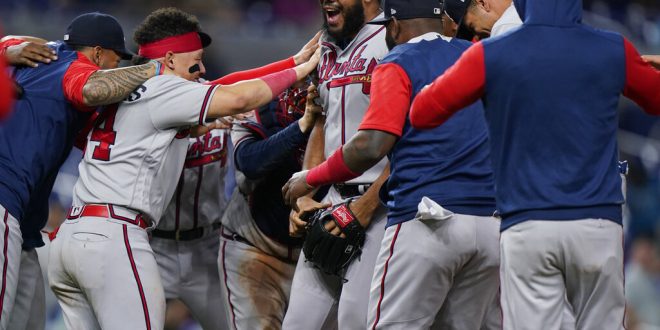 The Atlanta Braves clinched the National League East title on Tuesday night against the Miami Marlins, 2-1.

The Road to the NL East title

The Braves’ (101-60) win against the Marlins (68-93) put the Mets into the wild card spot. This year will be the Braves’ fifth consecutive year winning the NL East title. The Mets were leading the division with the Braves a little over 10 games behind at the beginning of June.

Over this past weekend, Atlanta took the east division lead after sweeping the Mets. For Atlanta to clinch a spot, they needed a win in the series against the Marlins or they needed the Mets to lose a game.

Ronald Acuna hit a two-out single, which drove Orlando Arcia home to give the Braves a 1-0 lead. Marlins outfielder Jesus Sanchez tied the game after he hit over the right field wall. Miami pitcher Braxton Garrett was pulled out of the fifth inning on two runs and six hits.

With the Braves spot clinched, the series will close out Wednesday at 4:10 p.m.

Speaking with the Associated Press, Braves’ manager Brian Snitker said he was happy with the hard work the team showed.

“Coming to work every day and worrying about today. They didn’t get caught up that we were behind,” said Snitker.