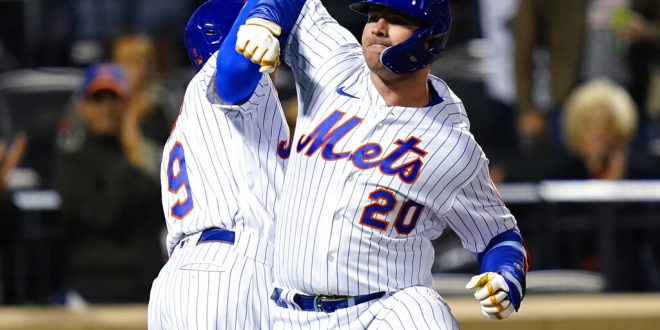 The NL East crown will be on the line as the regular season is coming to an end. The New York Mets (98-58) and the Atlanta Braves (97-59) are on a crash course in what might be the most significant series for both of these teams so far this year. The Mets currently hold first place in the NL East by only one game before coming into Atlanta. The defending World Series Champions have been neck and neck with the Mets for a majority of the season despite a slow start. They won 14 straight games in June and have been one of the hottest teams in baseball since that point.

Why Braves Will Take The East

We are talking about the World Champions, you cannot count them out. You can point to many factors when talking about how great the Braves are and why they will win the division. Although, Atlanta has elite pitching that can go toe-to-toe with the best rotations in all of baseball. One of the biggest stories for this season has been the rookies who have joined this team and have been nothing short of spectacular. We know that the heavy hitters on this lineup (Ronald Acuna Jr., Austin Riley, Dansby Swanson, etc.) but these rookies Michael Harris II and Vaughn Grissom have been key to this team.

Obviously, potential Rookie of the Year starting pitcher Spencer Strider has been elite all season for this team but unfortunately will miss the rest of the regular season due to a left oblique injury. The Braves will hope to have him back in the postseason.

Center fielder Michael Harris II has been on a tear this season. He is batting .305, with 19 home runs and .876 ops, which has put him in the NL Rookie of the Year conversation. Along with the defensive presence he provides in center field Atlanta may have their outfield set for the foreseeable future.

It is important that we don’t overlook the second baseman Vaughn Grissom who is having a solid rookie season quietly. Although he does not hit for power with only five home runs on the season, he has a .786 ops and is batting .290 on the season. The rookies in this lineup take this Braves team to a whole other level compared to last season. It seems as if they have little to no holes in this lineup so be ready for some fireworks even against the elite pitching of the Mets.

Why The Mets Will Take The East

The Mets have had control of the NL East for the majority of the season but they cannot pump the brakes. Coming into this next series against the Braves, having the one-game lead in the division is crucial. The last time they traveled to Atlanta they lost 3 of 4 and put the Braves right back into the division. The Mets have moved the rotation to have two-time Cy Young award winner Jacob deGrom Take the mound for the first game. It is clear that the Mets will need their pitchers to show out if they want to put the Braves away in this series. That hasn’t been too much of the issue this season.

New York will need to provide run support for their elite pitchers in deGrom and Max Scherzer which will mostly fall on the back of their two best hitters. Francisco Lindor and Pete Alonso will need to be the dominant hitters that they are capable of being.

Although Lindors’ season has had its fair share of ups and downs, his bat with runners in scoring position has been clutch all season. This season with RISP and two outs, Lindor is batting .345 with a 1.026 OPS in 55 plate appearances. Lindor can score runs with the best of them and has come up big when the Mets need him to all season.

This leaves the biggest bat for the Mets all season, Pete Alonso. Probably the Met’s only true power hitter, Pete Alonso has hit 40 home runs on the season. The first baseman has now become the first Mets player in franchise history to record multiple seasons with 40 home runs or more. New York has been able to rely on Pete for most of the season but without him and Lindor, this Mets team could see trouble offensively.

Both teams have already clinched a playoff spot. The Mets have the advantage in the season series so far winning nine of the first 16 meetings is huge. So, if the Mets just take one game in Atlanta, they’ll win the season series and hold the tiebreaker at the end of the season. At that point, it would be up to the Mets to handle the Washington Nationals in the last series of the season. As for the Braves, they need a sweep to take a two-game lead in the division and put them in a favorable position as they will finish their season against the Miami Marlins.

The division winner will hold the No. 2 seed and a first-round bye into the NL Division series. The loser will be the No. 4 seed and have to play in the Wild Card Series against the Padres, Phillies or Brewers in a best-of-three matchup. At this point, it comes down to who wants it more.