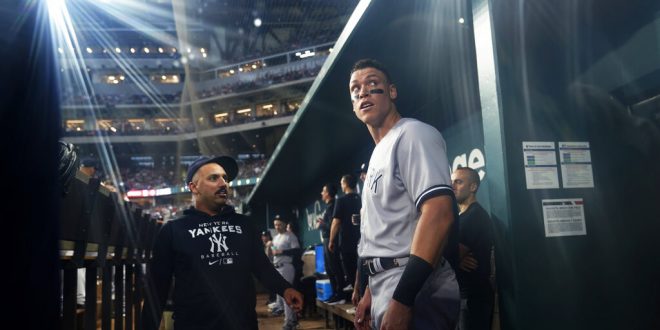 New York Yankees' Aaron Judge stands in the dugout after his solo home run during the first inning in the second baseball game of the team's doubleheader against the Texas Rangers in Arlington, Texas, Tuesday, Oct. 4, 2022. With the home run, Judge set the AL record for home runs in a season at 62, passing Roger Maris. (AP Photo/LM Otero)

Aaron Judge blasted his way into the history books last night with his 62nd home run of the season. The slugger now stands alone as the sole American League home run champion. He broke the record of 61 set by Yankee legend Roger Maris in 1961.

The Chase is Finally Over

Judge finished off his record chase last night in Texas.

With Judge not getting pitches to hit, anticipation built on whether he would hit 62 before the season ended. One group watching anxiously as Judge chased down the record was the Maris family.

The family has been attendance for Yankees games since Judge hit 60. They stayed in New York to watch their dad’s record be threatened and even traveled to Toronto for a series.

The record is important to the Maris family as baseball is a big part of their lives. Kevin Maris, son of Roger, coaches high school baseball in Gainesville, Florida. Their dad taught them the game, and they have a great respect for it.

Judge’s season has been historic because he broke the American League single-season home run record. The Maris family views Judge’s accomplishment as much greater than that.

In MLB history, there have been four players to eclipse 61 home runs: Judge, Barry Bonds, Mark McGwire and Sammy Sosa. Besides Judge, the other three players all played in MLB’s steroid era.

Prior to Judge’s record 62, Roger Maris Jr. expressed how they viewed their dad’s 61 home runs as the real home run record. This is because there is much speculation on the legitimacy of the steroid era home run totals.

Steroids or performance enhancing drugs (PED) have been banned from the MLB since 1991. However, the league didn’t start testing for them until 2003, which allowed players to take them and not be caught because they didn’t police the rule. Bonds, McGwire and Sosa all are suspected to have taken PEDs.

The most home runs ever hit in a single season is 73 by Barry Bonds in 2001. Judge is nowhere close to Bonds’ 73, but the Maris Family views Judge’s 62 as more legitimate.

The Maris Family is proud that Judge broke the record clean.

Congratulations to Aaron Judge and his family on Aaron’s historic home run number 62! It has definitely been a baseball season to remember. You are all class and someone who should be revered. For the MAJORITY of the fans, we can now celebrate a new CLEAN HOME RUN KING!!

Maris Jr. believes that fans should view Judge as the true home run king. He is the only player to ever hit over 61 home runs without the heavy speculation of cheating.

Additionally, the way Judge has handled the home run chase is something they respect. Kevin Maris had this to say about Judge the player.

Maris drew comparisons to Judge’s approach to the game being similar to his dad’s. Here are his thoughts on how his dad would feel seeing Judge close in on the record.

Judge Thanks the Maris Family

After the game, Judge reflected on his journey and thanked the Maris family for their support. Here is the clip from the Yankees Entertainment and Sports Network.

Aaron Judge: It's been a fun ride so far. pic.twitter.com/uQsmG74k6T

The chase is over, and it is time for playoff baseball.