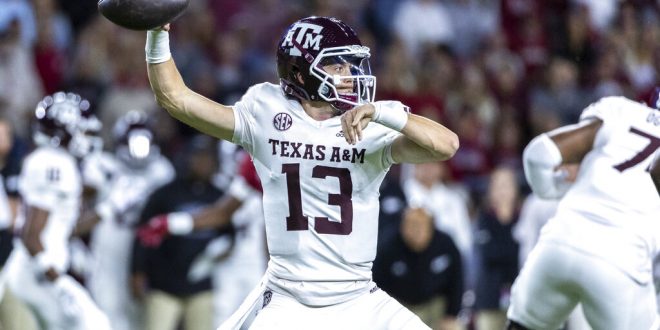 Texas A&M quarterback Haynes King (13) throws the ball against Alabama during the first half of an NCAA college football game, Saturday, Oct. 8, 2022, in Tuscaloosa, Ala. (AP Photo/Vasha Hunt)

Texas A&M looks to bounce back after bye week

The Texas A&M Aggies have a bye week following a 24-20 loss to then-No. 1 Alabama on Saturday to end the first half of their 2022 season. On Wednesday at the SEC coaches’ teleconference, head coach Jimbo Fisher said although the team is disappointed with the outcome, they have had a good week of practice.

Texas A&M to this point

Although they began the season ranked No. 6 in the AP poll after reeling in arguably one of the best recruiting classes in college football history, Texas A&M’s 2022 season has hardly been the success story that many predicted.

Halfway through the season, the Aggies are 3-3 overall, which includes a shocking 17-14 loss at home to Appalachian State. Two of their wins came against opponents who were once ranked but now sit unranked in the most-recent AP Poll (Miami and Arkansas).

Last week, the Aggies went toe-to-toe with the Crimson Tide before losing on the final play as quarterback Haynes King’s pass to Evan Stewart near the goal line fell incomplete.

Alabama defensive back Terrion Arnold, who was covering Stewart, told the media following the conclusion of Saturday’s game that he heard Fisher call out that the play was going to Stewart.

“I’m actually looking at Jimbo before the play, just going through, and he’s like, ‘Evan, Evan, Evan, Evan.’ I was like, ‘OK, I’m ready,” Arnold said, according to The Tuscaloosa News’ Nick Kelly.

Fisher explained the play call on Wednesday and said he wasn’t sure if Arnold heard him or not, but that King’s decision to throw to Stewart was the correct read.

Stewart finished Saturday’s game with eight receptions for 106 yards, both a career-high for the true freshman.

Additionally, many believe that Arnold got away with a pass interference on the final play. Fisher said that he thinks any pass can go 50/50 on interference calls, and they will discuss the call with the SEC offices.

Although a tough first half of the season, there are bright spots throughout the Aggies’ roster.

Running back Devon Achane is fourth in the SEC with 528 rushing yards while adding a team-high three touchdowns. Additionally, Achane’s 912 all-purpose yards ranks fourth in the nation, which includes a SEC-leading 287 kick return yards.

After being benched prior to the Aggies’ win over Miami, King retook the starting quarterback spot after LSU transfer Max Johnson suffered an injury. Through the first half of the season, King leads the team with 763 yards and five touchdowns, but his five interceptions have cost the Aggies. In replacement, Johnson threw for 517 yards and three touchdowns against zero interceptions. However, an injury in the 42-24 loss to Mississippi State took him out of the game and possibly the season.

I am told Texas A&M QB, Max Johnson has a broken bone in his throwing hand. Sadly, he might be done for the the season – at the least the foreseeable future.

Rounding out the offensive leaders, true freshman Stewart leads the receivers with 26 receptions and 303 yards while adding a touchdown. His yardage is second for all freshman in the SEC behind Vanderbilt’s Jayden McGowen (380 yards).

Defensively, safety Antonio Johnson has shined despite only two tackles against Alabama on Saturday. The junior has a team-high 48 total tackles, good for sixth in the SEC. His 13-tackle performance against Arkansas earned him the Lott Trophy Player of the Week.

Following the bye week, the Aggies take a trip east to take on South Carolina before returning home to face No. 9 Ole Miss. Even with the game still two weeks away, Fisher does have an early scouting report on the Gamecocks.

The following week, Texas A&M hosts Florida for the second time in three years. Since joining the SEC, the Aggies are 2-1 against the Gators, including a 41-38 upset victory in 2020.

Texas A&M plays their final away game of the season against Auburn on Nov. 12 before concluding the season with back-to-back home games against UMass and SEC rival LSU.

Cam is a fourth-year broadcast journalism sports and media major at the University of Florida. In addition to writing and recording radio trendings for WRUF, Cam covers North Florida HS football for The Prep Zone and Mainstreet Daily News and UF football and basketball for Inside the Gators.
Previous Missouri football heads into bye week
Next NFL Preview Podcast Episode 6