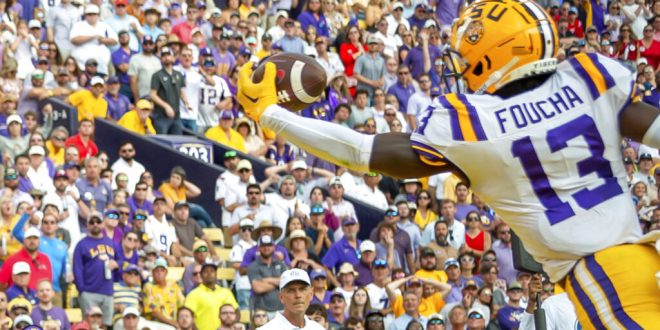 A Look Around the SEC Through Week 8

After another week of college football across the nation, the SEC remains the top conference in the poll. Despite having four teams off with a bye, the latest AP Rankings feature three teams currently ranked in the top-six and seven in the top-25 from the conference.

POLL ALERT: LSU moves back into AP poll at No. 18, No. 25 South Carolina enters rankings as top six holds firm.

Georgia had its bye this week and is set to face the Florida Gators in Jacksonville this weekend. The Bulldogs are 7-0 this year and have outscored their opponents 97-10 in their previous two games.

Tennessee continues to remain ranked third after its win Saturday. The Vols routed Tennessee-Martin 65-24 in a non-conference game after scoring 52 points in the first half. They will have their bye this week before facing Georgia in their next game for potentially a shot to clinch their spot in the SEC Championship Game.

Alabama made a statement in its last game after falling to Tennessee in Week 7. It beat No. 24 Mississippi State 30-6 to move to 7-1 this year.

Ole Miss was one of two ranked teams to fall this week, along with Mississippi State. The Rebels raced out to an early lead against LSU but were outscored 28-0 in the second half to fall to the Tigers. LSU moved back into the rankings and sit at No. 18. It will have a week off before it hosts Alabama at home on Nov. 5. South Carolina picked up a win over Texas A&M and moved into the top-25. Missouri also beat Vanderbilt as the Commodores remain the lone winless team in conference play, at 0-4.

The lone matchup this week featuring ranked teams will be No. 19 Kentucky traveling to Knoxville to take on No. 3 Tennessee on Saturday at 7 p.m. Ole Miss will try to rebound after its loss when it faces Texas A&M, while Arkansas will head to Auburn and Missouri will play South Carolina. Alabama, LSU, Mississippi State and Vanderbilt will be off.