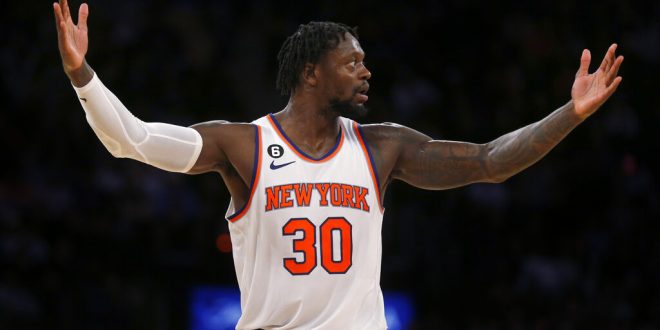 New York Knicks forward Julius Randle looks to the referee for a foul call during the second half of an NBA basketball game against the Orlando Magic, Monday, Oct. 24, 2022, in New York. (AP Photo/John Munson)

The Orlando Magic is still trying to hit its stride this season, losing 115-102 to the New York Knicks on Monday.

Despite 21 points from Paolo Banchero, the Jalen Suggs-less Magic failed to win its first game this season after winning the draft lottery last year.

Paolo Banchero has been a bright spot for the team thus far, and last night was no different. He has scored 20 points or more in each of the team’s games this year in a variety of ways. He has also been a defensive menace averaging 1.5 blocks per game this year.

Banchero’s presence was not enough to stop the Knicks from scoring, and the forward finished without a blocked shot.

The story of the night for the team was the emergence of 7’2″ Bol Bol, the former Oregon Duck and son of the late Manute Bol. The towering center was active on both ends of the floor, scoring 19 points in 20 minutes and blocking four shots. Despite Suggs’s absence due to a sprained ankle, Bol’s bench minutes gave fans something to look forward to.

The Knicks Wore the Pants

Julius Randle’s 25 points led the Knicks and sealed the team’s 13-point victory over Orlando. New York moved to 2-1, and the team’s big three each scored 20 points or more.

Tom Thibodeau’s squad will face LaMelo Ball and the Charlotte Hornets Wednesday as it continues to try to push toward a return to the postseason. The team missed the tournament last year after losing its first round series to the Hawks.

Jamahal Mosley’s Magic men will have a dangerous matchup in the form of the upstart Cleveland Cavaliers Wednesday.