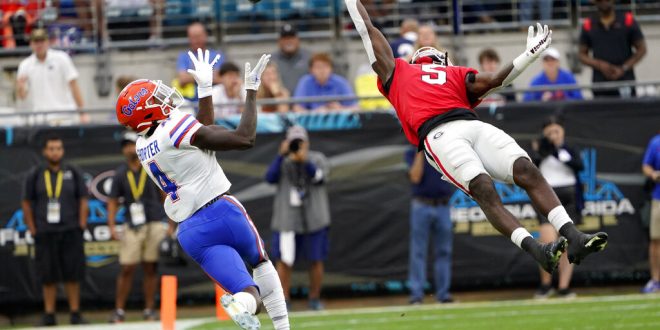 The Gators rallied after halftime, scoring 17 of their 20 points in the third quarter. However, Georgia’s offense dominated the game, tallying 555 total yards while Florida ended with 371. UF quarterback Anthony Richardson completed 18 of 37 passes for 271 yards while Georgia quarterback Stetson Bennett completed 19 of 38 passes for 316 yards.

The big difference between Florida and Georgia’s offensive play was rushing yards. The Gators totaled 100 rushing yards, 53 of which came from running back Trevor Etienne. For Georgia, the running back duo of Daijun Edwards and Kenny McIntosh recorded almost double that. The pair combined for 196 of Georgia’s 239 total rushing yards.

Georgia began its dominant run halfway through the first with a one yard touchdown run by Edwards. Then on their following drive, McIntosh ran up the middle for a two yard touchdown, leaving Georgia up 14-0 by the end of the first quarter.

Entering the second quarter, Georgia quarterback Stetson Bennett’s pass was intercepted by Florida safety Jadarrius Perkins. The Gators, however, were unable to produce anything offensively, and the Bulldogs quickly got the ball back.

Georgia kept its scoring run going. Bennett threw a 73-yard touchdown pass to tight end Brock Bowers, putting the Bulldogs up 21-0. The Gators, though, were able to get on the board before the end of the half. Richardson’s 41-yard pass to wide receiver Justin Shorter helped set Florida up into field goal range. Kicker Adam Mihalek successfully made the 52-yard field goal, making it 21-3 Georgia. With less than one minute left in the quarter, Bennett threw a seven yard touchdown pass to wide receiver Ladd McConkey, increasing Georgia’s lead 28-3.

The Bulldog’s defense was a brick wall for the Gators. Florida couldn’t secure any first downs until the second quarter, totaling only two in the first half compared to Georgia’s 15. Offensively, the Gators had 13 rushes for 13 yards with 75 passing yards while the Bulldogs’ 18 rushes resulted in 84 yards with 262 passing yards.

Florida head coach Billy Napier said the team’s execution could be better, and they dug themselves into a hole in the first half.

Shift for Florida in the third quarter

After halftime, Florida emerged from the locker room a different team. On their first drive, Etienne scored a three yard rushing touchdown, pushing the Gators up to double digits. Then, Gator linebacker Amari Burney recovered a fumble by McIntosh on the Bulldogs’ first possession of the third quarter, which led to a Florida 26-yard field goal.

Just what the Gators needed. pic.twitter.com/ciVL3BPRoe

Gators making it a game?

Florida has 10 unanswered points and another interception. pic.twitter.com/CK7ANz6SV0

Richardson wasted no time and threw a whopping 78-yard passing touchdown to wide receiver Xzavier Henderson. With only 3:31 left in third quarter, Florida scored 17 points to make it a 28-20 game.

Napier said he gained a level of respect for this team after their response at halftime.

The scoring run didn’t go unanswered, though. Before the quarter concluded, Georgia upped its lead 35-20 with a 22-yard touchdown run by Edwards.

Florida’s chances of making any possible comeback were swiftly crushed in the fourth quarter. Not only did Georgia’s defense prevent any more scoring chances for Richardson and the Gators, but a McIntosh four yard touchdown extended the Bulldogs lead to 42-20, the final score of the game.

Despite now holding a 4-4 record, Gator defensive lineman Tyreak Sapp said to expect nothing but success from Florida for the rest of the season.

Next up, the Gators travel to take on Texas A&M November 5 at noon.

Kaitlyn Wadulack is a fourth-year journalism student specializing in sports and media at the University of Florida. You can reach Kaitlyn at k.wadulack@ufl.edu
@kwadulack
Previous Dooley’s Grades (Florida vs UGA)
Next Gator Volleyball Completes Sweep of Arkansas