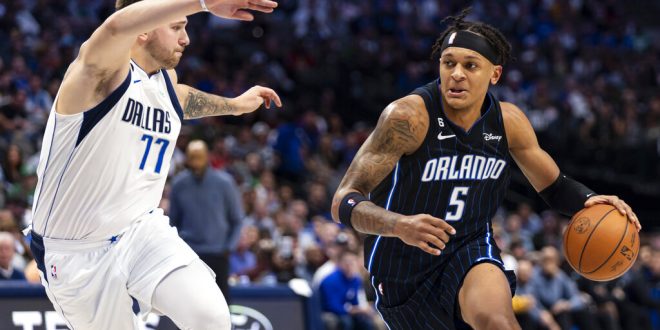 The Orlando Magic couldn’t keep up with the Dallas Mavericks on Sunday. The team fell to the Mavs 114-105 , dropping their record to 1-6. Dallas improved their record to 3-3 and the team did an impressive job of slowing down rookie Paulo Banchero.

Orlando came out hot in the first quarter scoring 34 points and taking a five-point lead. This was the Magic’s third consecutive quarter of 30 or more points going back to the second half of their win over the Charlotte Hornets on Friday. Though, the Mavs responded in the second quarter and Luka Doncic set the pace, ending the first half with with 30 points. The MVP candidate finished with 44 points on the night, which is his season high on the young season.

The Magic stayed right with the Mavs the entire second half, losing the third quarter by just five points. Banchero attempted to lead a fourth quarter surge but he didn’t have his shooting touch. For the first time this season, the budding star was held under 20 points. One bright spot for the Magic was the production of their young center Bol Bol. The fourth year player recorded a double-double with 16 points and 11 rebounds in 30 minutes of play.

However, as the final buzzer sounded, the Magic came up short 114-105.

Orlando has struggled with injuries to start their season. They are down four guards including Cole Anthony and Jalen Suggs. Missing that many ball handlers have affected their pace of play and rhythm. Despite this, the young core of the team is gaining valuable experience. Other than Terrance Ross, the Magic don’t have a player in the starting lineup over the age of 23.

Additionally, they seem to have found a true No. 1 option in Banchero. The early favorite for Rookie of the Year has been historically good so far. His scoring habits at such a young age should help him continue to set records.

Paolo Banchero is the 7th player in NBA history with 20+ points in each of his first 5 career games.

He is the youngest ever to do so. pic.twitter.com/NmJjujFtOm

The Magic’s next game is against the Oklahoma City Thunder Tuesday at 8 p.m.