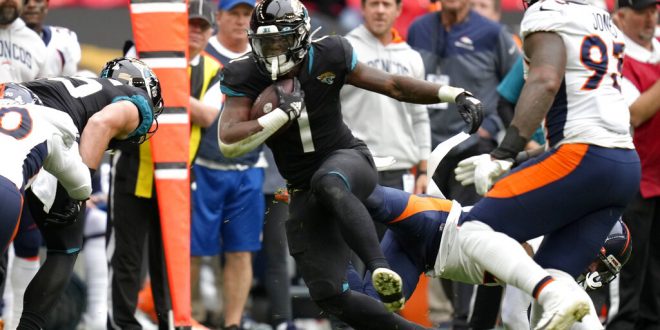 Jaguars Fall to Broncos in London

With the Florida Gators and Georgia Bulldogs taking over TIAA Bank Field on Saturday, the Jacksonville Jaguars flew to London to take on the Denver Broncos at Wembley Stadium.

It was a back-and-forth battle between the two teams, but the Broncos were able to grind out a win.

The Jaguars were the stronger team in the first half. The defense made an impact early after Tyson Campbell picked off Broncos quarterback Russell Wilson midway through the first quarter. Trevor Lawrence monopolized on the opportunity after finding Evan Engram in the end zone to put Jacksonville up 7-0.

Later, the Jags hit a field goal in the back end of the second quarter before Jerry Jeudy found the end zone with less than three minutes to play in the half.

The Jaguars led 17-14 with less than four minutes left in the game after a Travis Etienne rushing touchdown. The Broncos only needed a field goal to tie the game and extend it to overtime. However, after a successful drive, the Broncos went for it all. They brought the ball all the way to the red zone and Latavius Murray finished off the drive with a two-yard rushing touchdown.

The Jaguars had one last chance for a game-winning touchdown, but Denver was able to get a stop on the final possession and secure the 21-17 win.

Russell Wilson has been under a lot of scrutiny for his slow start to the season, but he had an impressive performance on Sunday.

He completed 18 of his 30 passes, throwing for 252 yards, a touchdown and an interception.

It is a step in the right direction for both the veteran quarterback and the team, but time will tell if the success will be sustained.

The Jaguars may have lost, but Travis Etienne’s performance was a win for both him and the team.

After missing his entire rookie season from a Lisfranc injury, there were a lot of questions about his potential coming into the season. But Etienne has broken out over the past couple of weeks, and after the Jaguars traded fellow running back James Robinson to the New York Jets, it seems Jacksonville is confident that Etienne is their guy.

In Sunday’s game, Etienne rushed for over 150 yards and a touchdown.

ETN punches it in to give us the lead!#DENvsJAX | #DUUUVAL pic.twitter.com/RMsIkfbYHv

With the win on Sunday, the Broncos are now 3-5 and sit in third place in the AFC West. Week nine is a bye week for the team, but they will take on the 5-2 Tennessee Titans in Week 10.

With the loss, the Jaguars are now 2-6 and sit in third in the AFC South. They take on the Las Vegas Raiders in week nine at 1 p.m.

Journalism student at the University of Florida. Contributor for WRUF and WUFT. You can reach Aileyahu at a.markellshanes@ufl.edu or 786-316-5878.
@a_shanes10
Previous Dolphins Win in Detroit
Next Magic Fall to Mavericks 114-105