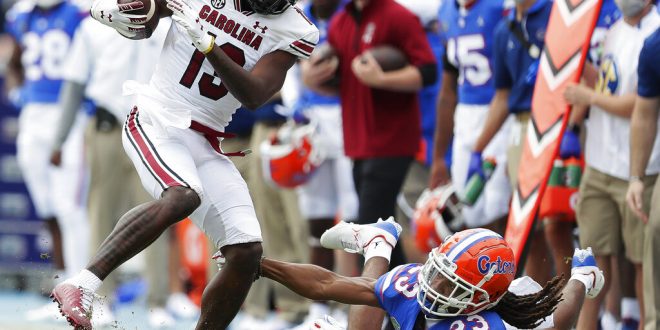 The Florida Gators’ defense has been a rollercoaster this season.

From Amari Burney’s last-minute interception against Utah to Jaydon Hill’s decisive touchdown return against Missouri, the team has shown flashes of defensive brilliance. However, it has also had a few collapses. In their last two games, the Gators allowed 87 points and over 1,000 yards of total offense against Louisiana State and Georgia.

The late bad results have resonated among Gators fans. Yet, the defensive unit has stayed resilient.

Hill, a redshirt sophomore cornerback, believes the team will keep fighting through adversity.

This season, Florida has struggled with third-down defense, often allowing opponents to capitalize on explosive rushing plays. However, the secondary group has proved somewhat reliable with eight interceptions (4th in the SEC).

Hill believes the entire unit can polish its down-defense execution and route recognition by studying game film. He also is confident the team will keep battling despite the added fan pressure.

Hill said Cox’s dismissal was unexpected but that he respects the coach’s decisions. He also sees this as an opportunity for new players to step up.

Co-defensive coordinator Patrick Toney has been the focal point of criticism. Over the last month, some fans have taken their frustration of Toney on social media, but coaches and players have supported him all season. Hill said he’s aware of the complaints, but Toney’s ability is doubtless.

Hill also believes it is up to players to execute the game plan.

The Gators will finish their season with three of their last four games on the road. Florida will head to College Station on Saturday to play Texas A&M before visiting Vanderbilt and Florida State. Hill believes that despite the pressure, a rowdy atmosphere can be a motivational factor for the team.

The Aggies put up one of the best freshman classes in the nation entering the season, but the results haven’t been there. They have chained four losses in a row, all for SEC play. Despite that, Hill knows the Gators are in a similar position and need to prepare well to win.

Previous Nets in search of new coach after firing Steve Nash
Next Georgia and Tennessee provide historic matchup of two No. 1 teams